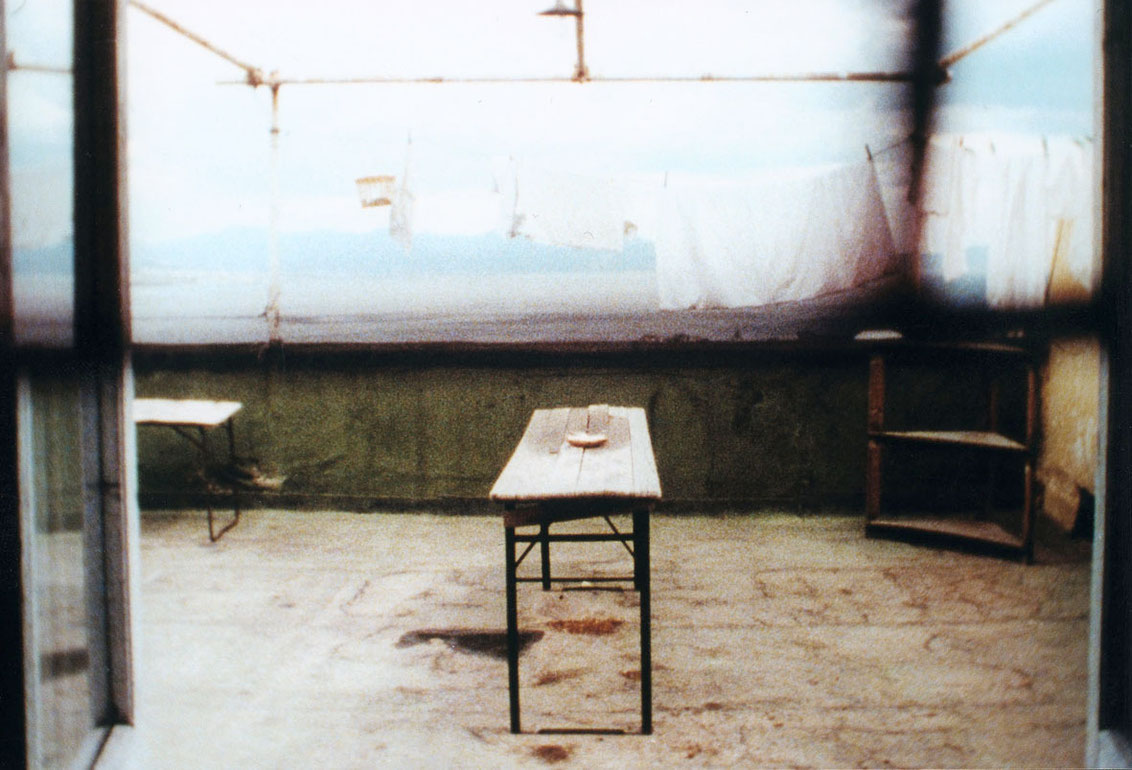 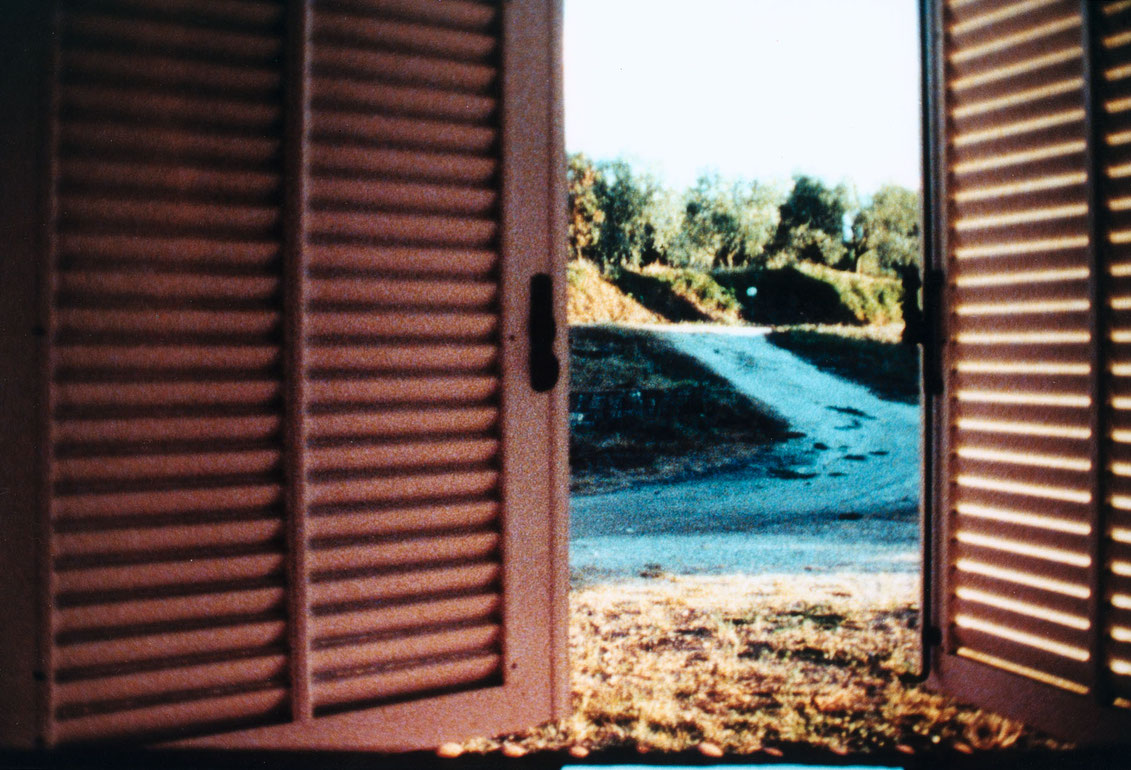 Camera presents three tableaux which focus on the relationship between the photographic apparatus and the space it is used to record. The camera shows us three rooms, all of which are "cameras" (in most Romance languages). Although the individual tableaux could stand alone and they have been separated by brief intervals of black frames, their sequence seems to bring up another aspect, that the certainty of our gaze is endangered whenever vantage point and visual focus reflect one another.

The first tableau is thoroughly inviting: It creates the impression that the viewer is on an open terrace in summer, with the sounds of traffic coming from far away, laundry hung out to dry and the sea, sky and clouds visible in the distance. In fact, the space which is shown is anything but open: Being composed of three different shots, it can exist inside the camera only. Our gaze is limited by images transformed into walls, as if the screen had suddenly become a camera obscura.

While the possibility of making the space which surrounds the image disappear is explored in the first tableau, this space is restored in the two which follow. In the first case, the environment, and in the second the room is delineated by an exterior which is just barely visible. The viewer´s gaze gains its freedom by differentiating between the visible and the invisible, the film and the world, though only under the condition that it searches for another sky from the room. This freedom is an illusion: Not the invisible but the visible is the enigma.

Seven Instances of the Austrian Avant-Garde, by Ed Halter

Thomas Bernhard tells the story of two professors at the University of Graz who move themselves and their families into a single house together for the purpose of continuing an entrenched, decades-long philosophical argument. After embroiling a third colleague in the dispute, they invite him over to their shared home, then blow up the buildingthus ending the discussion. They had spent all the money they had left, Bernhard writes, on the dynamite necessary for the purpose.

Imagine this tale as a parable of the distinctive paradoxes of avant-garde cinema. Exceedingly erudite conceptual structures and complex aesthetic systems achieve realization through collisions of light and sound, designed to throw the viewer into a confrontation with the barest elements of cinematic form, made possible with the slightly antiquated products of 19th century science. The formalist edge of Austrian filmmaking has always pushed such extremesmachine flatness and spiritual emotion, animal shock and cognitive puzzle, fleshy materialism and ghostly mystery.

Austrias success in fostering such a powerful experimental film scene is well known among cineastes worldwide. A conflux of generative factors can be cited: the storied history of avant-garde art and literature in Vienna; the influence of filmmakers such as Valie Export, Peter Kubelka and Kurt Kren, who attained international renown decades ago; the success of shorts distributor sixpackfilm, which has helped keep Austrian artists prominent in international festivals; and, not least, the long-standing commitment of governmental organizations such as Film Division of the Department of the Arts to fund such adventurous, non-narrative films. Dynamite doesnt come cheaply.

Look at a sample seven titles underwritten by the Film Division, and the impact of this sustained support will be made clear.

There is a discernable sensibility to Austrian experimentsa cluster of threads that run through many of finest examples of filmmaking. Commissioned to mark the cinemas centenary, Krens Tausendjahrekinoopens with a title screen speckled with black bits of dust and detritus, then volleys through staccato flashes of tourists pointing cameras up at the St Stephens Cathedral in Vienna. Each of their banal snaps is countered by Krens guerrilla anthropology, captured with his shaking, zooming lens. Like this one, the best Austrian films are short, brutal and dirty.

Arnold takes Judy Garland and Mickey Rooney, two icons of innocent 1930s Americana, then stretches and remixes their language and body movements into a minuet of robotic jitters and beastly bleats, uncovering an uneasy sexual tension in the triangle of girl, boy and mother. The filmmaker digs deeps, hits nerves.

From the rubble of a decimated cinema in Bosnia and Herzogovina, Groen found propaganda newsreel footage of Yugoslavian President-for-Life Tito. Reprinted, Tito moves silently under layers of decay. Peter Gidal once defined materialist cinema as trafficking in that space of tension between materialist flatness, grain, light, movement, and the supposed reality that is represented. To this Tito-Materialadds the tension between past and present, state-sponsored fantasy and political reality.

The past becomes an ever stranger land in Film Ist. , filled with disjunctive colonialist mansions, supernatural religious footage, and accidentally surrealist science documentaries, all snatched from the era of silent cinema. These fragments are slowed down, re-cut and set to staticky electronic soundscapes. The flicker and hum evoke a hypnotic state: revisiting times lost as a form of disembodied dreaming. The soundtrack itself presages the experiments in digital, visual glitch seen in a more recent generation of Austrian video art.

White oblong shapes float like clouds across one another, sailing across an expanse of movie-screen blackness, each glowing box in the round-cornered shape of a 16mm sprocket hole. One again a spirit is summoned from the very materials of the machine.

In Cmelkas earlier films, Mit Mir and Et In Arcadia Ego, the filmmaker plays with her own doppelgangers, superimposing herself upon herself multiple times. Camera uses similar optical tricks to print moving images of woodlands on the interior walls of a small room. Recall that camera merely means room or chamber in Latin: so is the film camera offer a window on the world, or merely in illusion of one? Maybe we cant really leave the roomor cameraafter all.

7. Peter Tscherkassky, Instructions for a Light and Sound Machine (2005)

American critics blithely assume that films from outside our borders always comment on our own cultureas if the worlds artistic output had the mere function of an elaborate vanity mirror for us (So, tell me honestly, how do I look?). But here such a claim does not feel like this kind of indulgence. Tscherkassky takes moments from The Good, The Bad and the Ugly and handprints them into a rat-a-tat-tat wartime montage. The throb of exploding bullets reminds us of the clacking of the projector over our heads: the reflection throws us out of the theater and back into the world.

Certainly not every nation that has chosen to invest its capital into filmmaking has been as fortunate as Austria with the cultural returns. In many other nations, governmental financing and grant foundations make the mistake underwriting the bland and inoffensive. The strategy in Austria seems to have been to support the strongest elements of the idiosyncratic and rebellious fringe, to encourage daringly noncommercial work, and to strive for art, rather than mere entertainment.

Look at key words from these seven titles: kino, waste, material, film, exposed, camera, light and sound machine. Austrian experimental cinema always returns to contemplate its own being, but in doing so, seeks new engagement with the world.