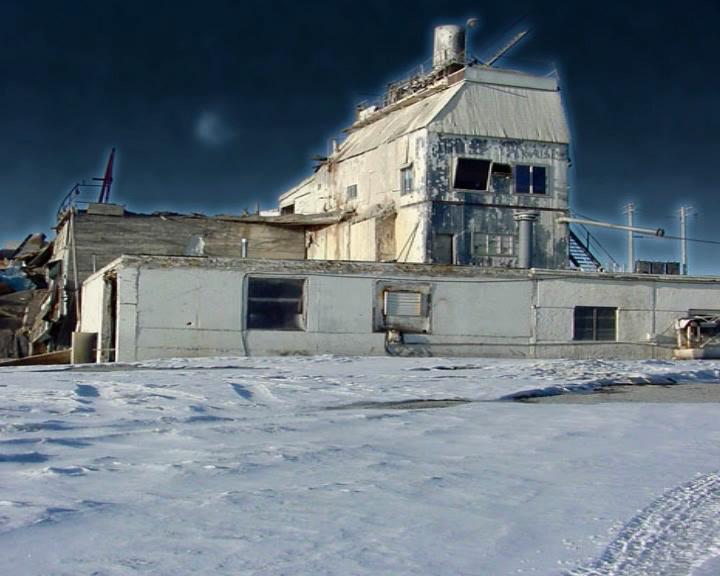 "Lost Destinations" is the name of a Web site dedicated to obscure locations in the USA. "Abandoned, unusual, wild and weird road trip photography and beyond" is presented for the viewer´s pleasure, including illustrations of an abandoned concrete and building-material factory in Idaho Falls (the "Monroc Facility"), which is the starting point for Michaela Grill´s video of the same name. A still image of the picturesque industrial ruin appears repeatedly throughout the half-hour work like a refrain, its stanzas comprising three independent abstract studies. The soundtrack by Martin Siewert underlines the suite´s synesthetic character, such as by casting acoustic shadows in places where the video image builds on musical parameters such as rhythm, timbre and tonality. When the color and brightness of individual images are modulated in the reprise, the three episodes independently sample a range of more abstract visual characteristics. Beginning with a window in the factory´s façade, the first is spatial depth, which monroc attempts to capture in a vortex-like zoom with a sequence of crosshairs that appear and overlap. The increasingly gloomy stream of music complements the three-dimensionality. The second episode addresses the moment of transparence or opacity: Shades of gray and layers of black and white blur as if the viewer were looking through several panes of glass, producing various kinds of amorphous blurriness. The third layer takes aim at the aspect of resolution, using a multi-pane window: Greatly enlarged pixels fill the picture, suspended between accelerated flickering and architectural static. Power chords brace themselves against the final disintegration of the images. In the end monroc comes to a lyrical, even gentle conclusion with the reappearing still.


Image and sound have the same priority in the production process as well as in tthe finished video and are not used in an illustrative way. They are two different language systems andlanguage games respectively that are interlocked and affect each other reciprocally. Our main aim is to combine image and sound to a synaesthetical experience and thereby produce music for the eyes and images for the ears.


Working in collaboration with sound artist Martin Siewert, Michaela Grill´s almost synaesthetic monroc continues her retsless, cerebral deconstruction of filmic practice. Again, the focus is on an abandoned former workspace - in this instance, the "Monroc Facility", a former concrete and building-material factory in Idaho Falls, a still image of which, barren and imposing, recursthroughout the half-hour film like a chorus, framing and differentiating three independent abstract studies, each based on a different visual property (spatial depth, opacity, resolution). Where Chen Chieh-jen´s work couldbe taken as a critique of globalisation, or even a feminist polemic, this is something else, more abstracted and elusive.