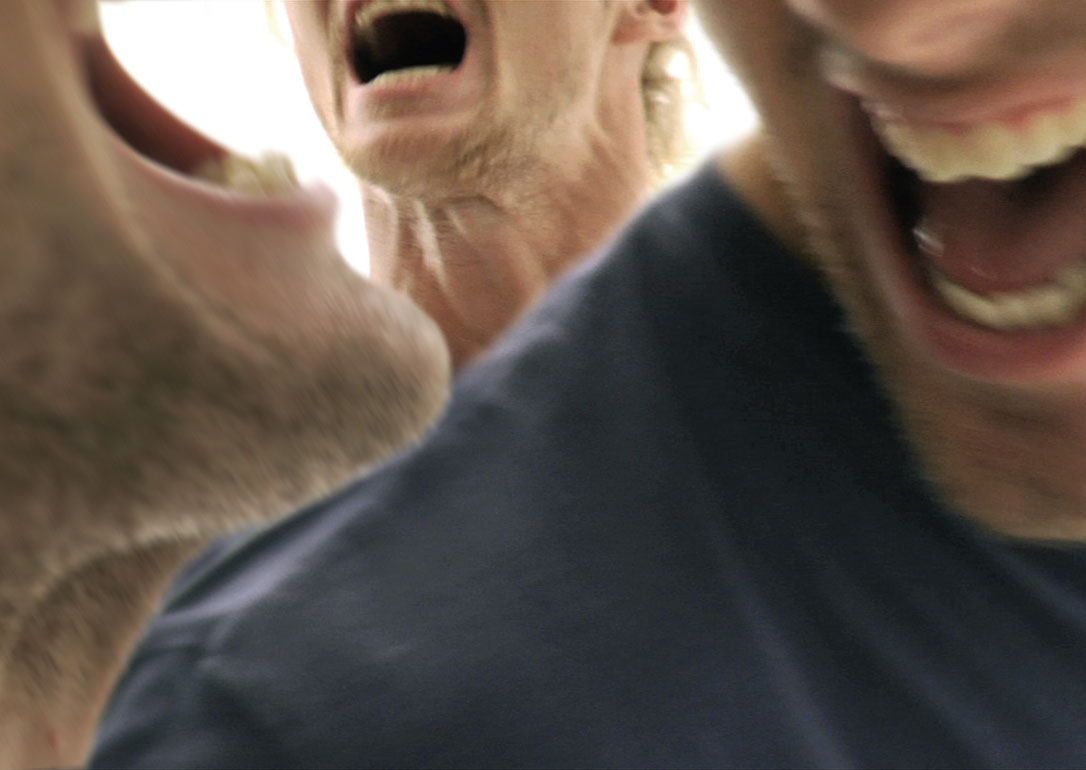 Kurukshetra – the field of the eighteen-day mythological battle, which is told in great detail in the 100,000 double verses of the Sanskrit Mahabharata epic.

The Kurukshetra-Report – Games in an empty white room. Two men in a clinch: punching, beating, kicking, strangling, groaning, whimpering, shouting. In rapid alternation: familiar representations of violence from the cinema and other arts. The ballet of Far Eastern martial arts alongside pure Blood-Realism with make-up on. But no justifications or explanations here. No story, no motif, it is simply so. Provocation and material for the endless censorship debate that revolves around the assumption that films provoke and foster violence, render viewers victims.

But how, when the viewer is not really so innocent? How, when, in an act of regression he even enjoys engaging with the pictures of violence. That`s nothing new, and not only in dreams. Constructed in its most beautiful form in a forgotten film genre, in slapstick, but also in cartoons: a ceaseless beating and stabbing, a torrent of baseness. Infantile sadism, polymorphous perverse sexuality. A worldwide audience once helped these films to tremendous success – and mobilized censure and criticism. But that is simply vulgar – which is, after all, true.

Yet the picture of a simple, regressive viewer is incomplete. Infantile amusement enters into a paradoxical tryst with the appraisal and admiration of the depiction`s artistry that makes entirely clear that no one is harmed in the outrageous attacks. Which, in the end, also applies to the feature film and its stars. For that reason, thanks also go to Alexander Pach and Marc Patrick Dressen, who slam and are slammed so skillfully for Ascan Breuer`s demonstration of violence.


…Two bodies in battle – mutually smitten in clean engagement. THE KURUKSHETRA-REPORT is an expedition to the nucleus of violence. In cold blood the video peels the flesh to reach the pure core, to make this dumb thing talk point-blank – without mercy.
…Beyond good and evil, beyond issues of morality, empathy and adequacy something remains: a demand that refuses to speak – and which is rejected by us. As a result violence emerges easily in our culture as an enigma, a fascinating phantom – now and ever since: in sports, computer games, film, comic, art, politics, history and sex. As the title implies the cultural time-space-frame of this phenomenon is unlimited. The video traces this tradition in a sinister synthetic manner.