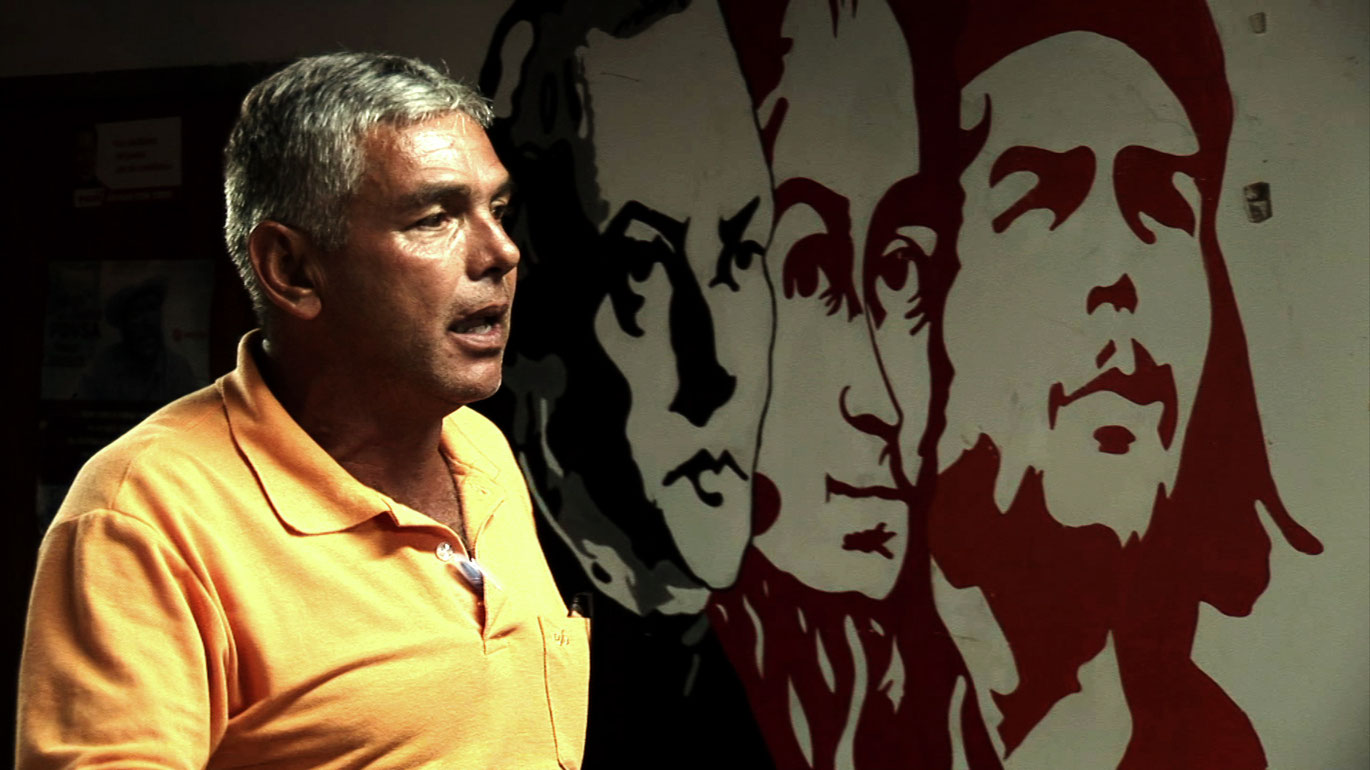 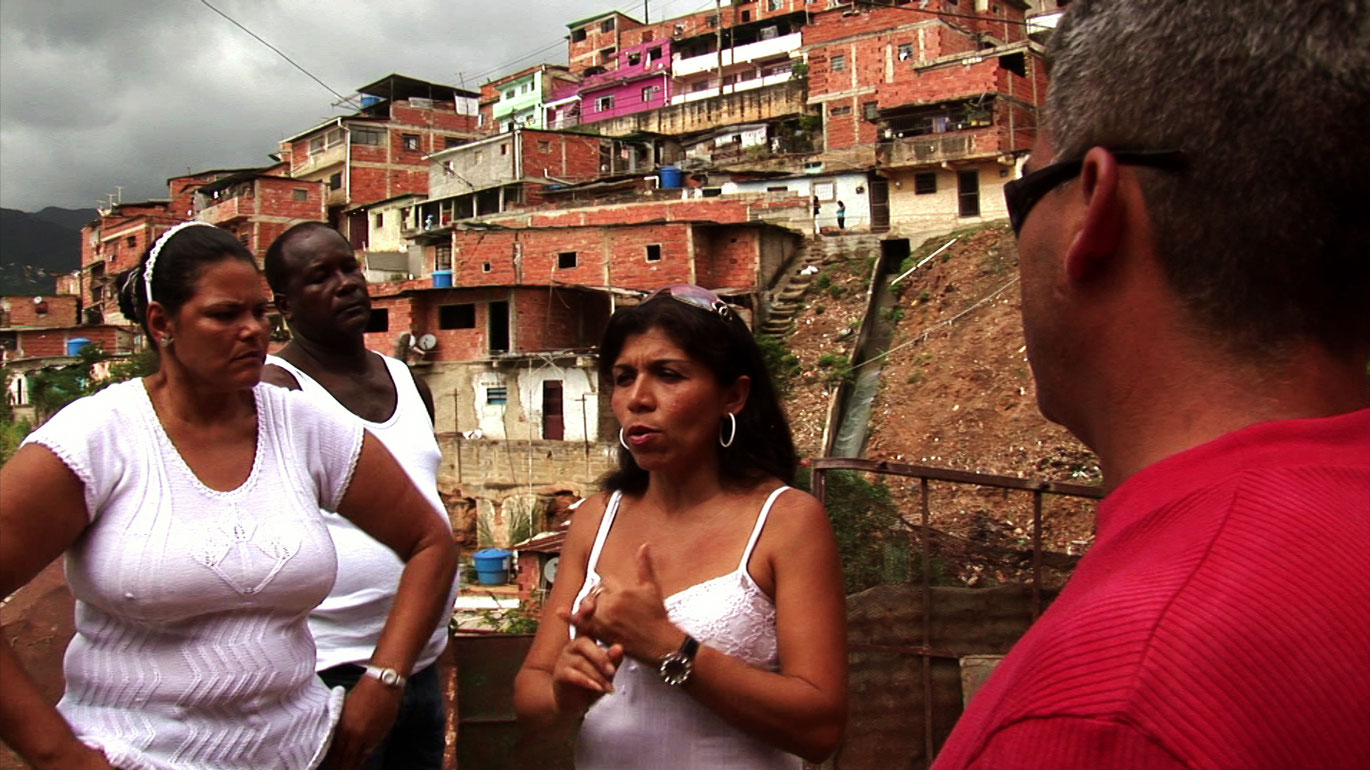 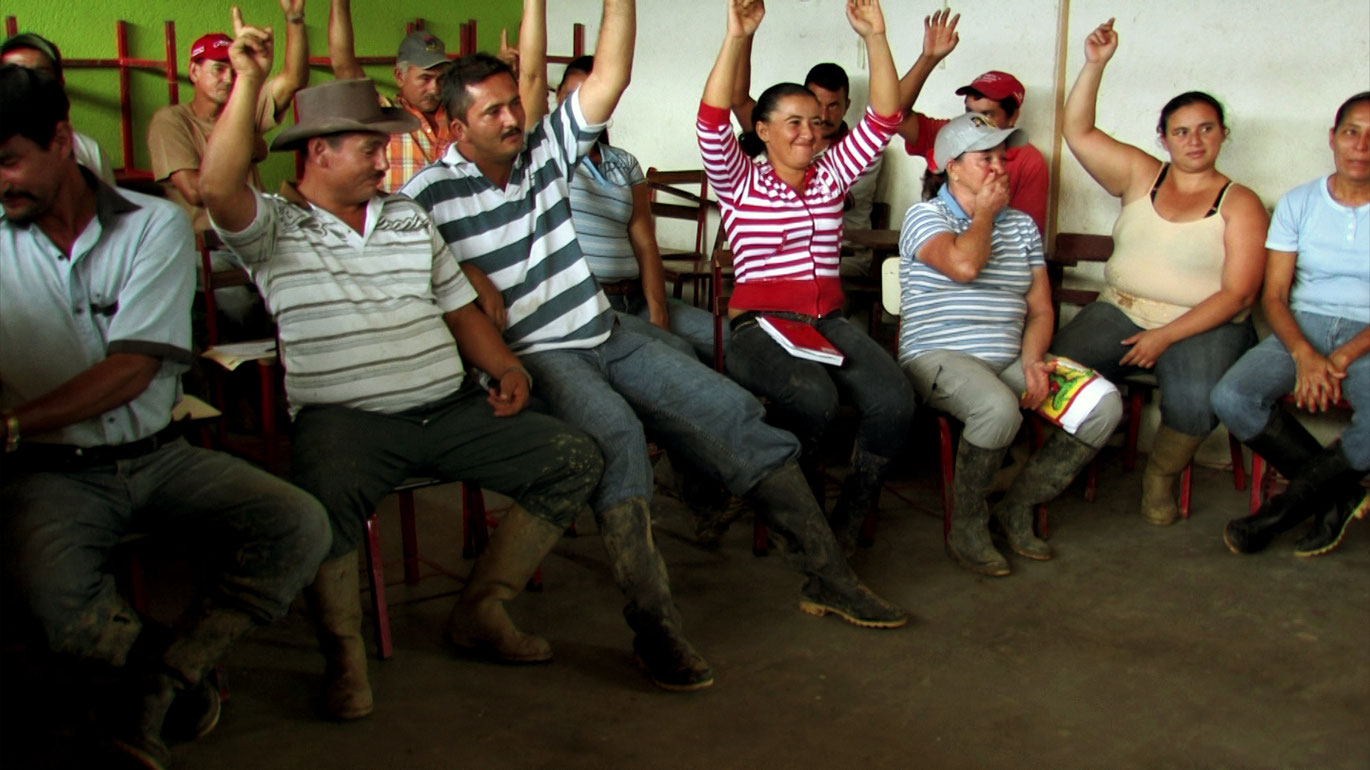 "Influential media´s fixation on a charismatic personality such as Hugo Chávez unfortunately means that the countless interesting processes taking place in the country remain hidden." Oliver Ressler´s programmatic remark on his previous film 5 Factories – Worker Control in Venezuela (2006) also applies to his third work produced in Venezuela in collaboration with Dario Azzellini. Comuna Under Construction reveals what the "Socialism of the twenty-first century" propagated by Chávez might mean in practice.
In the mode of a simple listening and looking at various gatherings in the poor neighborhoods of the capital Caracas, and also in rural areas, the film accompanies – without comment or interview´a stage of a fascinating process that has taken hold of large segments of the country. Tens of thousands consejos comunales (communal councils) have been founded in Venezuela in the spirit of the new constitution, which greatly emphasizes political participation. These basis democracy neighborhood gatherings attend to housing refurbishment, health care, and garbage pick-up routes, with financial support of the state, and to a great extent do so independently of the local administration. They can, however, also found communal enterprises and decide on the priorities in the city district. Bit by bit, the film uncovers the phenomenon, which might appear from an affluence-accustomed perspective as a compensatory one in the face of a lacking or corrupt administration, as a prospering parallel structure ultimately intended to entirely replace the old state: several councils can join to a commune, several communes, in the end, to a communal town.
Comuna Under Construction puts forth for discussion the practice of a – by no means conflict-free – revolution that is not exhausted in the takeover of power, but rather, is defined as a complex construction process leading to the goal of self government of the citizens.

What does Latin America mean to you? Richard Nixon reportedly said that people ‘don’t give one shit about the place’. For many on the left, by contrast, it is a beacon of socialism. From the mid 1990s to the early 2000s, onlookers followed Mexico’s indigenous Zapatista movement; many saw its partial successes as proof of the potency of the autonomist ideas of John Holloway, and Antonio Hardt and Michael Negri. Since then, the torch has been passed to the rather different figure of Hugo Chavez, the charismatic, realpolitiking president of Venezuela and the head of the Bolivarian movement. An outpouring of documentaries has ensued: Kim Bartley and Donnacha Ó Briain’s vital and astonishing The Revolution Will not be Televised, 2002, John Pilger’s proselytising The War on Democracy, 2007, and Oliver Stone’s mainstream South of the Border, 2009. Lesser known are the three films made by Oliver Ressler and Dario Azzellini (Comuna Under Construction, 2010, 5 Factories – Worker Control in Venezuela, 2006, and Venezuela from Below, 2004) all of which take a close look at the everyday experiences of ordinary Venezuelans.

In Comuna Under Construction, Ressler and Azzellini have bypassed the cult of Chavez in order to look at the grassroots facets of the movement. Across Venezuela, activists have established thousands of Consejos Comunales (community councils) where citizens discuss local concerns and seek solutions to common problems; these councils in turn can combine to form the ‘Comunas’ of the film’s title. Jaquelin Ávila is one such activist. In the film, we follow her as she sets about establishing a new commune in a barrio on the outskirts of Caracas. The locals want a sewerage system that works, legal recognition of their property and connection to the internet. The process of achieving these targets is evidently a mix of advocacy and ad-hoc experimentation: Ávila tells one local man, ‘if you are willing to work then I will support you’, and reassures an assembled group that they also have the support of a neighbouring Consejo Comunal called Emiliano Hernández, which has been established for three years. Ávila proudly talks about the drains they have already installed there, the walls to prevent landslides and the replacement of mud huts with well-built brick houses.

Most of the action feels entirely spontaneous. Indeed, Ressler has edited his film with only the lightest of touches – primarily selecting material from hundreds of hours of footage. Shots are long, and filmed using a roaming camera. There are moments, however, when the viewer might suspect that we’re not getting a neutral impression of real, unmediated life. For example, when Ressler and Azzellini’s cameraman enters the recently completed home of one of the residents of Emiliano Hernández, the situation smacks of propaganda: owner Miriam Colmenares praises God for Chavez and talks about how happy she is with her lot. The disruptive logic of the documentary process is even more obvious in another section of the film: the filmmakers decide to travel into the countryside to visit a rural commune; the Emiliano Hernández commune gets wind of this and sends a delegate to travel with the filmmakers to establish trading and bartering ties with the ‘peasant’ group. Nevertheless, Ressler and Azzellini do not tarry on such points. Their concern is rather with enabling subjects to vocalise directly to the camera – there are no postproduction voice-overs, for example – and the filmmakers shrink from view not as an unseen controlling presence but simply in order to allow the Venezuelans to speak for themselves.

Comuna Under Construction is composed of three sections: two in the city and one in the countryside. In the latter, we see a group discuss how the ‘revolutionary’ socialist changes will allow them to escape the yoke of peasantry, resist the power of international corporations and bypass middlemen. One concern is the relationship to the state: one speaker says, ‘we are autonomous although we support the process and the president’; another states that ‘the president says that we farmers are no longer peasants but also citizens’. Chavez said much the same thing in 2007: ‘This is society, the people, taking power over the state. Power for the people … The people’s time has come.’ But the reality is that the state had authorized this power; indeed the process is far from a bloody revolution in the classic Bolshevik sense. An insight into this wider judicial framework appears in Iain Bruce’s book The Real Venezuela, 2008:

‘The concentration of land ownership was a curse from Venezuela’s history. The big landholdings, or latifundios, had to be done away with. But there was no need for any expropriation, President Chavez insisted, much less confiscation. The Land Law introduced in 2001 provided for a punitive tax on idle property, which would encourage big owners to hand over their surplus land to peasant cooperatives.’

In the more militant commune in Petare, a city in the northwest of the sprawling Caracas urban area, the debate revolves around a general sense of disillusion with the bureaucracy of the state and with the abovementioned concessions to big business. The first speaker talks about how ‘we are losing our credibility because of the incompetence of state institutions’. She tells listeners how the government body in charge of the communes has been restructured several times, creating an administrative nightmare and severe delays for grassroots workers (it is not simply the commune’s ‘credibility’ that is at stake, but also the welfare and improvement of the barrios’ most impoverished homes). She rails against the minister in charge, and threatens to call a press conference in order to appeal to the Venezuelan people and, of course, to Chavez himself. These moments reveal the core concern of both the commune movement and Ressler and Azzellini’s film: the tension between constituent power and the state authority that authorises it, between the mobility of small groups and the lumbering apparatus of the state. The question here is: how can a centralised bureaucracy and multitude of decentralised communes flourish together? The question of whether they can co-operate at all has already been answered in the affirmative.

Comuna Under Construction was screened on 22 September as part of the ‘Make Film Politically’ season at the ICA, London.