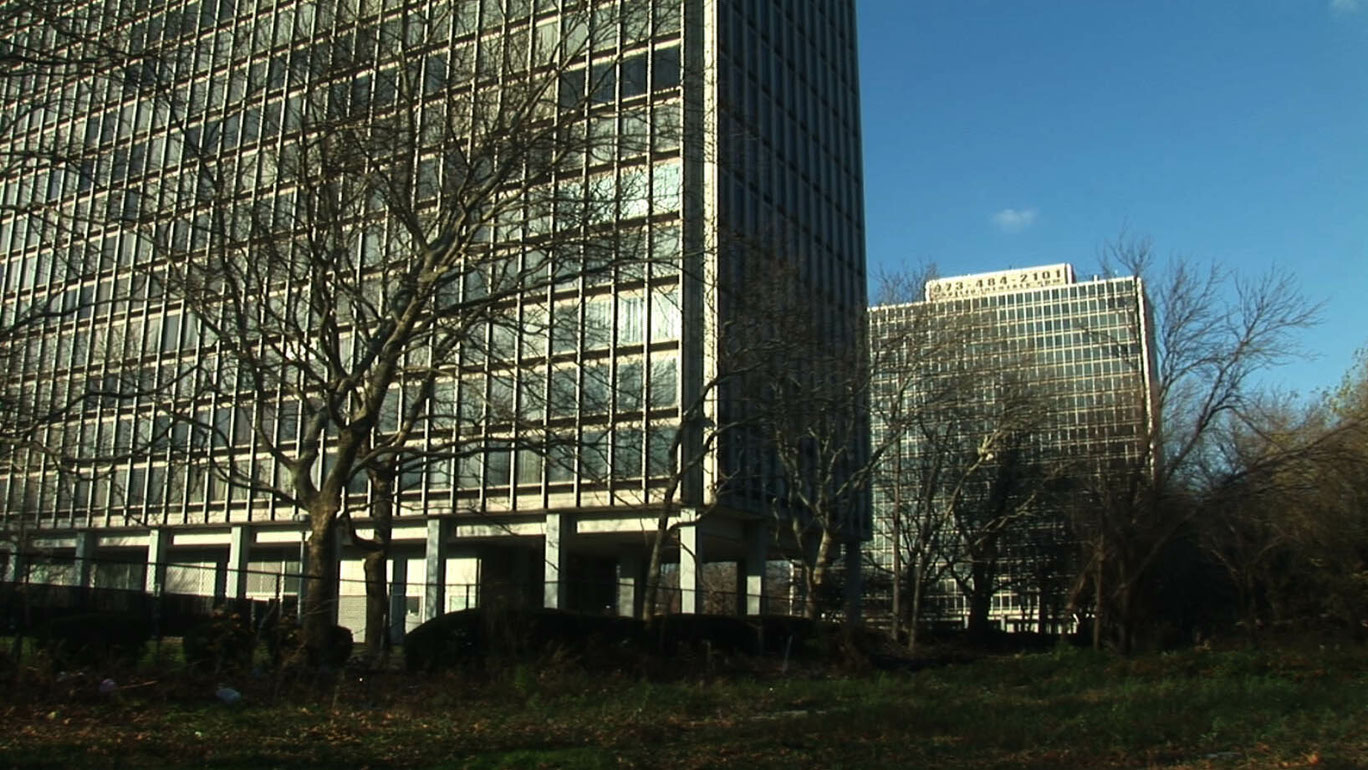 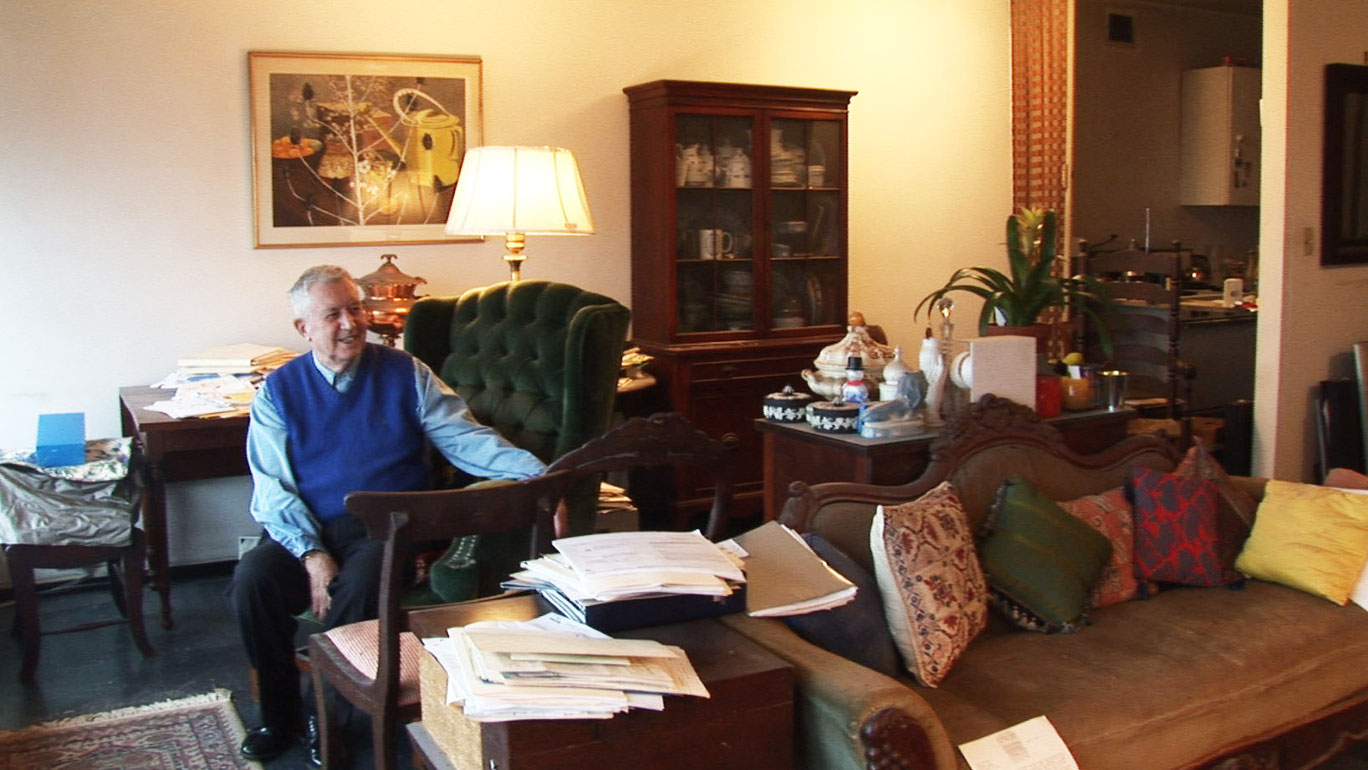 A house´s carrying capacity becomes visible in how it is used. With Colonnade Park, the last part of a documentary trilogy about modernist residential buildings, Heidrun Holzfeind, after turning toward Rome (Corviale, Il Serpentone, 2001); and Warsaw (Behind the Iron Gate, 2009); for the first time turns to the New World with the high-rise Colonnade as well as two pavilion buildings by Mies van der Rohe in Newark, New Jersey. Built in the 1950s to appeal to a middle-class elite and make living in the center of Newark attractive again, the building has a moving story behind it, which tells, over and above urban developments, of social shifts. Holzfeind immediately produces an impressive result. Even more so than in previous films, here it is the house that provides the structure – like a figure display case filled with portraits of current residents of the house.
The film casts the utopian project of Colonnade Park along the experiential horizon of an everyday personal experience and its environment, showing the individual appropriation and redesign of the space. Many of the residents demonstrate, for example, an uncommon passion for collecting; consequently, the functional exterior of the house is contrasted with the interior, revealing an almost museum-like landscape of individual idiosyncrasies. “Not society, but togetherness” is the essential moment of the communal life here, a painter once said – a view that is valid at least for the respective floor of the building. As a whole, it approximates the model society with its many African-American and white residents with an affinity for art: a contrasting co-existence of identities, unified above all by the spectacular views.


Like the earlier films, Corviale, il serpenentone (2001) and Za Zelezna Brama (Behind the Iron Gate) (2009), Colonnade Park (2011) questions the utopian promises of modernist architecture. Whereas the two earlier works took a critical look at residential complexes in Rome and Warsaw respectively, which were built in reference to ideas from Le Corbusier, Colonnade Park involves a residential complex by Mies van der Rohe in the US American city of Newark. Holzfeind has thus astutely positioned this trilogy, namely in the triangle of "old Europe", in a former East Block state, and in the USA. In Colonnade Park it is again conversations with the people who live and work there that are the main focus. These are interspersed with views of the three buildings with their striking architecture and gigantic glass façades. In addition, there are shots of the apartments of those interviewed and views from their apartments ... This portrait of a modernist residential complex is generated primarily from the statements of those who live there, and the aspirations of the reality of the Mies van der Rohe complex is defined entirely in Ludwig Wittgenstein´s sense—and he also worked as an architect—not directly by its architecture, but rather through the everyday use of this architecture. Differing degrees of satisfaction become evident here, with the spectrum ranging from disappointment to approval. Again and again, for example, there is praise for the expansiveness of the view through the high glass windows as well as for the multiculturalism of the residents. The technical standard of the twenty storey building from the 1950ies, however, finds no approval. Living practically isolated from the surroundings is also often critically noted. The quality of the social life is ultimately appraised differently. The inside of the outside architecture thus proves to be quite diverse... (from: On the Inside of the Outside(r). 4 Fragments)


The film portrays Mies van der Rohe’s Colonnade and Pavilion apartment buildings in Newark through conversations with its inhabitants. Built between 1954 and 1960, Mies’ three glass-and-steel towers and the Christopher Columbus Homes, a public housing project in between them, marked the beginning of urban renewal in Newark. Interviews with tenants about their experiences of living in the classic modernist buildings are juxtaposed with shots of their apartments and stunning views from their windows.


In the late 1940s, Newark, New Jersey witnessed the mass migration of both manufacturing and the upper classes to the growing suburbs after the industrial boom of the war years. Addressing the expansion of "slums" and the absence of standardized urban housing, the Federal Housing Act of 1949 enabled the clearance of "blighted areas" that would in turn be sold to private developers. These developers in turn approached the cleared sites with the primary objective of constructing middle-income housing. In the case of an Italian-American tenement neighborhood in Newark´s First Ward, the collaboration of private real estate developer Herbert Greenwald and the Newark Housing Authority led to the demolition of 470 structures and the displacement of approximately 4,600 people. The site was soon occupied at its center by the Columbus Homes, eight twelve story, low-income public housing units developed by the city. Targeting middle-income residents, Greenwald invited Ludwig Mies van der Rohe to design three 22-story glass and steel towers—the Pavilion and Colonnade Apartments which came to occupy the borders of the site. When Mies´s buildings were opened to residents in 1960, they embodied a translation of modernist glass and steel construction tailored to a middle-class clientele, accompanied by the prestige of an iconic architect´s signature.

The prioritization of middle class housing development in these years failed to solve what was a housing crisis for the vastly expanding urban poor. Housing shortages and the racial discrimination characterizing admissions policies were chief concerns of both the political demonstrations in Newark in 1967 (dubbed "race riots") and of the continuing momentum of the Black Power movement in the following decade. As the Newark economy stagnated in the 1970s, the Columbus Homes were gradually evacuated, having been subject to arson, vandalism, and neglect. In 1994, the buildings were planted with explosives, to be replaced soon after with the low-rise New Urbanist homes that stand today. In a speech delivered at the demolition, Newark mayor Sharpe James described the destruction of the Columbus Homes as "the end of an American dream that failed." The adjacent middle-class dream (imbued with Mies´s International Style sheen) had also declined dramatically over the course of its first three decades, dubbed by many locals "the glass projects."

In Heidrun Holzfeind´s film, "Colonnade Park", we become acquainted with the current residents of the Colonnade and Pavilion Apartments. The film incorporates Mies´s towers as a structuring framework; the window panes serve to connect the private world of an apartment to the expanse of Newark beyond and around it. Mies´s modernism is here not the primary subject but rather the mise-en-scène for alternate operations—namely, private lives that overflow the standardized shells in which we encounter them. We meet, amongst others, a criminal lawyer, an artist, and a flight attendant. Whereas the lobby maintains the strict restraint of a modernist pavilion—Barcelona chairs and a geometrically printed carpet are the only decor in evidence, the apartments, behind the curtain wall, are idiosyncratic worlds, cascading with myriad collections developed through the years—salvaged industrial objects, African masks, soda bought in bulk. A few tenants have introduced informal systems to the building that produce new community logics — a video lending library, a mail collection service. While some speak of neighborhood crime, one older gentleman shares a brochure marking the buildings´ vernissage in 1959. Amongst Holzfeind´s subjects, nonlinear narratives aggregate, constructing an emergent historical arc through recalled memories (of a residents´ dance club, of riots, of rent strikes) interwoven with other recollections—for instance, a 1980s modeling career evidenced by a scrap book. Just as Holzfeind´s film produces an archive, so too are her subjects archivists.

In conjunction with Colonnade Park, Holzfeind produced photographs documenting the site. During the photo-development process, the lab´s error became Holzfeind´s boon; the prints were delivered streaked and speckled with purplish-blue (sometimes pink) chemical solution. In the resulting images, a whimsical layer is superimposed between the negative (Holzfeind´s composition) and that which it indexes (a corridor, a view from the window, a cathedral in the distance). Between the Colonnade and Pavilion Apartments and these photographs, the spills and splotches displace both the Mies buildings and their 2010 imaging into a hazy third temporality.
Orig. Title
Colonnade Park
Year
2011
Countries
USA, Austria
Duration
54 min
Director
Heidrun Holzfeind