I don't exist yet 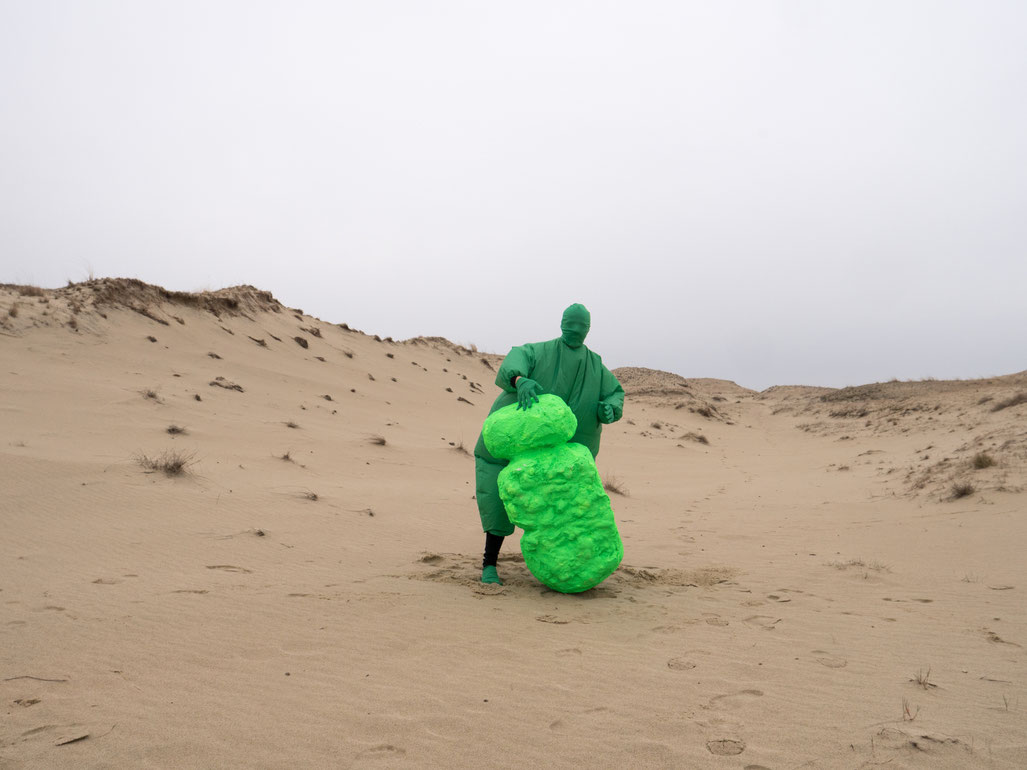 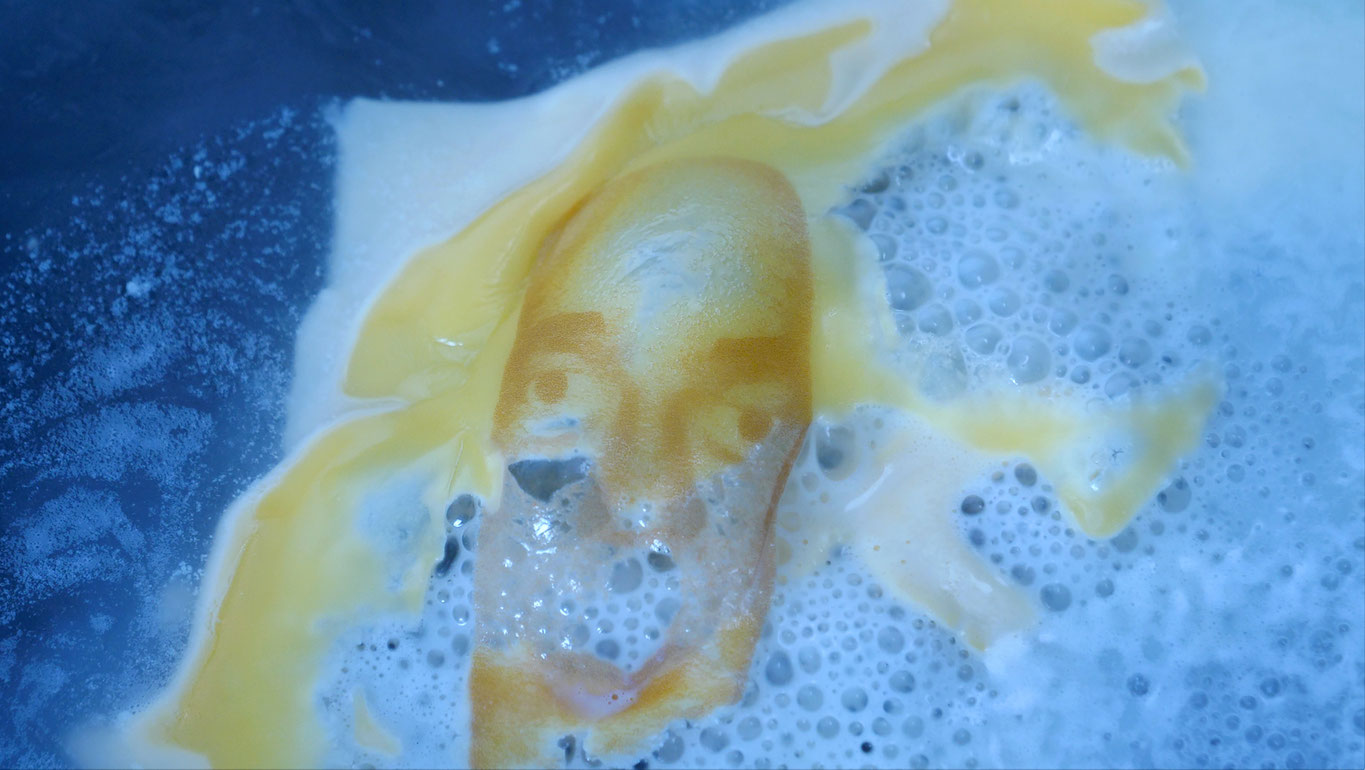 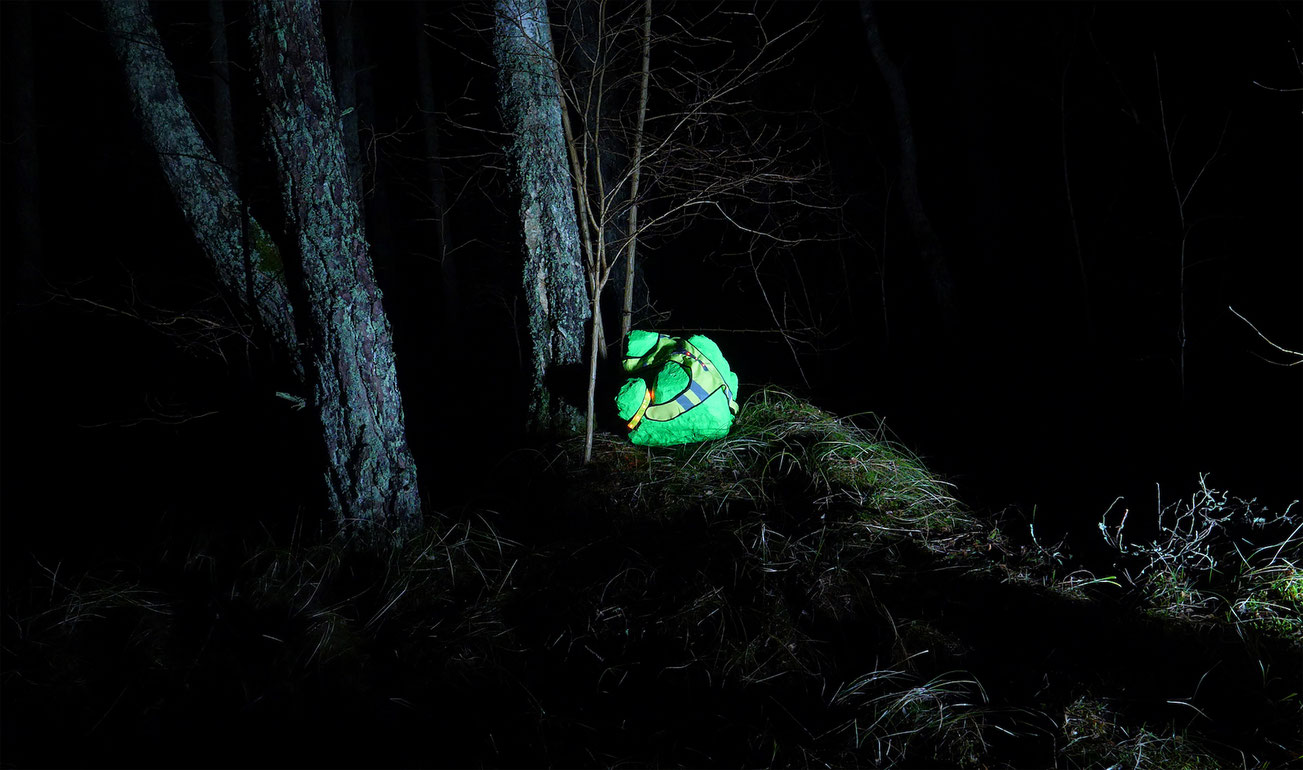 I don't exist yet deals with stand-ins for computer-animated characters. Initially invisible to the viewer, the computer-animated characters only come to life through mathematically simulated textures. As the central motif, Flock sheds light on the ghost costume of CGI. The invisible construction of digital effects are dissected to make the body of the seemingly bodiless tangible. Backstage, one still sees inanimate representatives, who only become subjects in digital reworking. (production note)

A person in a green fatsuit drags a bilious green blob-like object across sand dunes. This landscape is not a "desert of the real" in the sense of Jean Baudrillad, but rather, the real context for a symbol that’s not even a simulation, still entirely without referents. It serves as a placeholder for computer-generated characters that don’t yet exist. In I don’t exist yet, Susanna Flock focuses on the countless possibilities of a (main-)character who is first developing. Analogous to the human procreation process, it would be the embryonic stage of these characters that she devotes herself to: so much potential, so much uncertainty.
Set to an electronic, slightly threatening drone sound with built-in heartbeat, the placeholder keeps on surfacing: whether chained to a horse, as a counterpart to a real actor in the black box, or as a simple "stand-in" for a classical sculpture. In between, a face melts away—although similar to the Veil of Veronica, in the case of this "impression," it is a laser engraving on cheese spread. Three-dimensional objects dissolve and already finished animated figures fall apart, as though they had been put together incorrectly. Flock doesn’t celebrate the glitch—from the Yiddish-Deutsch glitchen, or slipping—as a reference to the digital. It is simply expression of one of several "realities" that meet in this collage, that rub against one another. Here, rather than the "seamlessness" of a manipulation, it is about the ordinariness of the visible seams.
The melancholy that resonates is more topical than ever: how are points of contact, or even encounter possible with something that remains a mere potential, that will perhaps never exist? (Claudia Slanar)