studied Painting & Post-Conceptual Art Practices from 2001 – 2007 at the Academy of Fine Arts Vienna (Gunter Damisch, Marina Grzinic) and the Berlin University of Arts (Daniel Richter). Her thesis project, the 12-piece installation “Paternoster”, won the prize of the Academy. 2009 her first short film “Der Doppelgänger” was premiered at the Diagonale in Graz. Her films and installations were featured at numerous international festivals and exhibitions, including Short Film Corner Cannes, Bolzano Short Film Festival, Bolzano Short Film Festival, Salon Européen de Jeunes Créateurs, Rheinisches Landesmuseum Bonn, Altes Pfandhaus Köln, Museumspavillon Salzburg, Vienna´s former juvenile court. In 2010 she won the “Excellence Award” at the Busan International Film Festival (South Korea). 2011 and 2012 she received a scholarship by the City of Bonn. In 2014 she obtained the “Förderpreis für Bildende Kunst” (Fine Art Talent Award) of the City of Vienna and was artist in residence at the Cité des Arts in Paris, supported by the Federal State Land Salzburg. Her new Film Tristes Deserts - A Robots Tale was premiered at the Hong Kong Filmfestival and was awarded for „Best Austrian Music Video“ at the Vienna Independent Shorts.
Her main interest is focused in a conceptual and playful approach to the various forms of public and private spheres, the outer and inner worlds, structures of authority, surveillance, system errors, mental disorders and affects such as private and global memory. In her work she is accompanied by the idea to visit the mind as a location, as a place of performance, to open up and to disintegrate it, in order to put it all together again from another viewpoint. This disintegration is what interests her about the display and the staging of an exhibition, originating from the urge to bring the mind to life. Preferably she works on large-scale film-, and performativ installation-projects but also devotes her time to painting.
Stephanie Winter is founder and artistic director of the experimental performance & production platform Salon Hybrid. 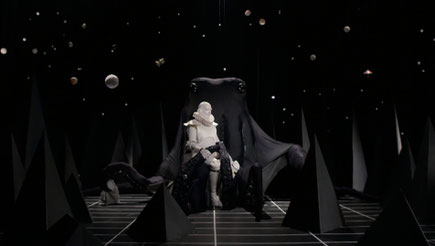