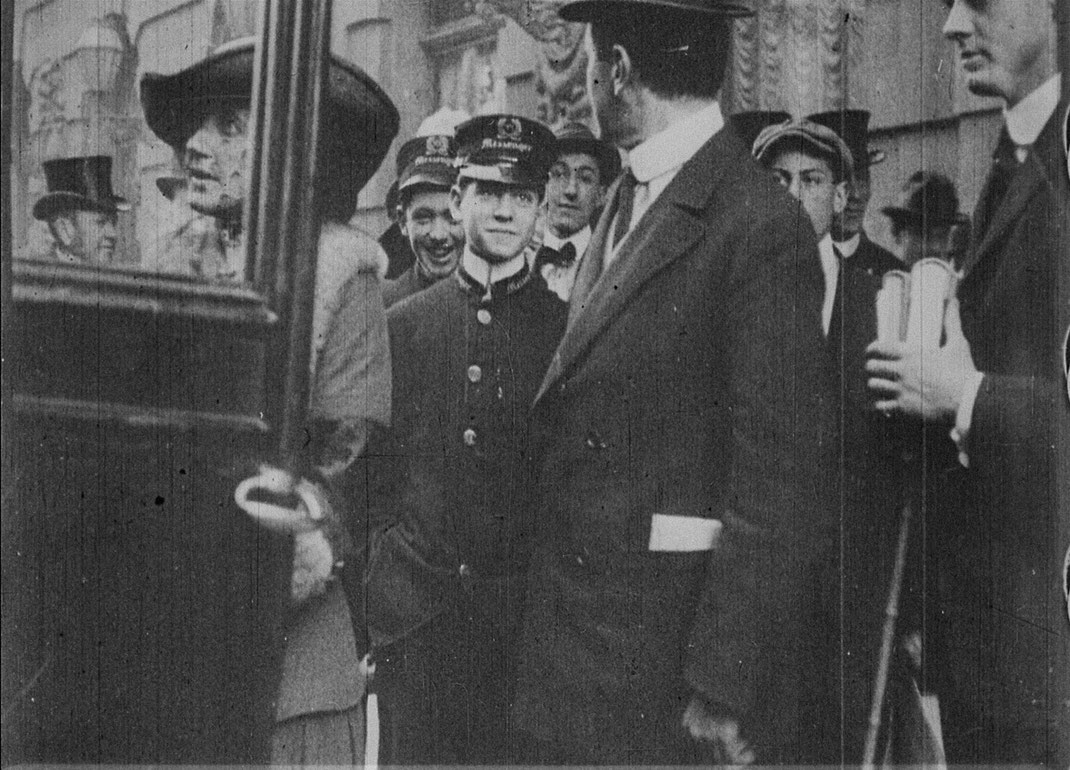 OCEANO NOX processes a 1912 newsreel that memorialized the sinking of the Titanic. The original material exemplifies both the formality and the poetic nature of documentary aesthetics in the days of Early Cinema. Close scrutiny and rewriting of the original punctures its newsworthiness and lays bare its underlying form. (G.W.)


TO EXPLORE A TOMB IN TIME by Judith Fischer

Then silence fell, and that was the worst sound of all.1

Faces and gestures, rituals and stagings, the final credits of the disaster.
Thought in motion: the factual, the melodramatic, the fictive.

OCEANO NOX by Georg Wasner employs newsreel footage about the sinking of the Titanic in 1912 to create a kind of poetic meta-documentary on early cinema. This work`s methodical openness, applied formally to metric rigidity, pervades its material, making it filmic research of intuition, resilience and analytic affection.

Like a healthy human heartbeat, which has an intrinsic irregular system, the body of an artwork gets its vitality from a rhythm based in uncertainty.2

OCEANO NOX must be regarded in the context of years of research Georg Wasner performed at the archive of Vienna`s Austrian Film Museum (involving the work of Dziga Vertov, etc.). The former master-class student of Peter Kubelka zooms the attention: Focuses are pulled, lines of vision and tempos are changed, approach and withdrawal alternate, immersion and appearance do not conform to a doctrine. The social staging of how a catastrophe was dealt with is read both intuitively and topically as a palimpsest.

Wasner`s rereading casts the archival material in a new media light: Dispensing with a conceptual corset makes possible a look at the posttraumatic terrain and its protagonists 99 years after the fact, turning it into an observation of an open grave ("dark and silent years"3).

The soundtrack is the result of a successful inspired transfer: A composition by Sekhar Ramakrishnan formed the nucleus, which pianist Elaine Brennan then modulated in a single live take. This provides an effective comment on the past practice of piano accompaniment for silent films and embodies it at the same time.
These fragments I have shored against my ruins.4


With his Oceano Nox Georg Wasner turns to found footage, employing newsreel footage from 1912 about the sinking of the Titanic. By enlarging details and speeding the film up or slowing it down, his adaption directs the gaze to the unfamiliar and perplexing, and the seemingly unimportant. Wasner creates a new temporal order and shifts attention, revealing design principles and specific characteristics of early cinema, and probing the "documentary value" of such recordings. At the same time, the film becomes even more closely linked to a reality beyond its originally intended news value, to a lived and filmically experienced reality. (Barbara Pichler)