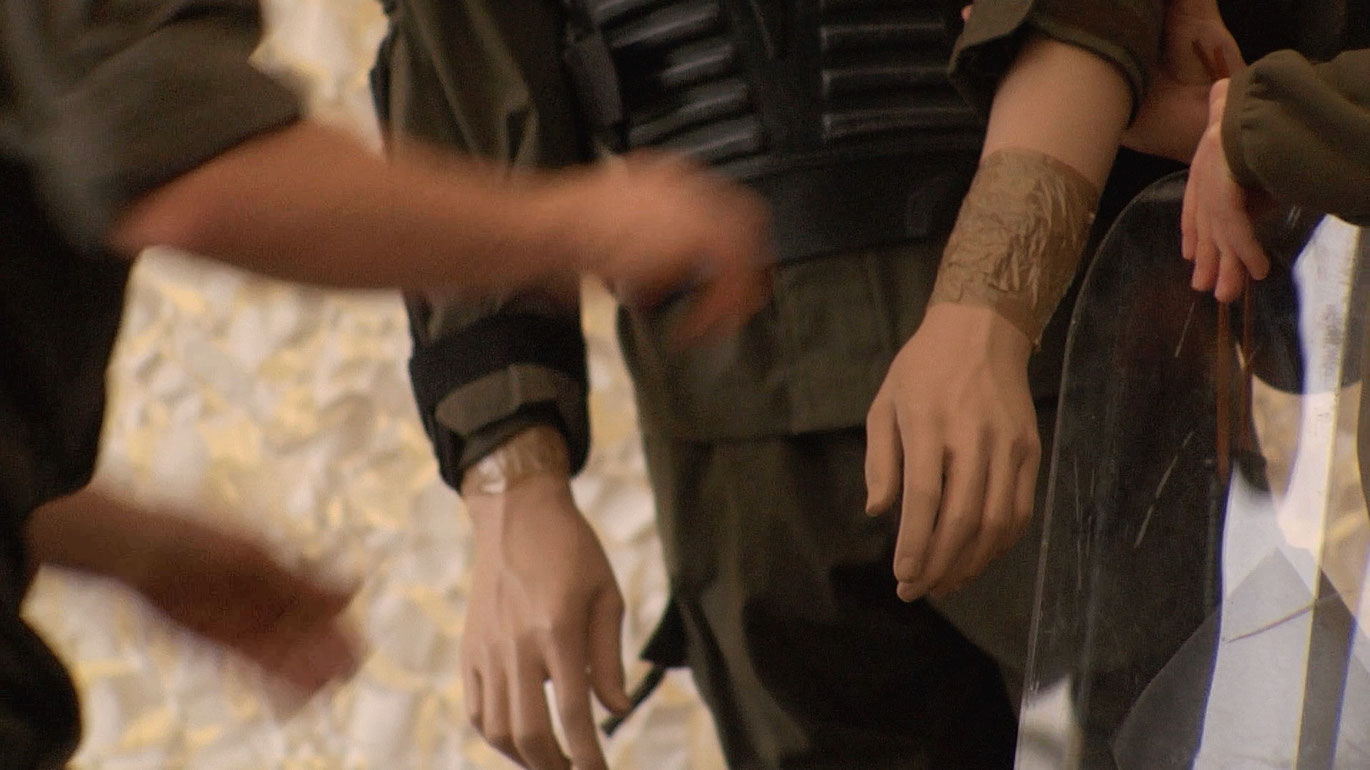 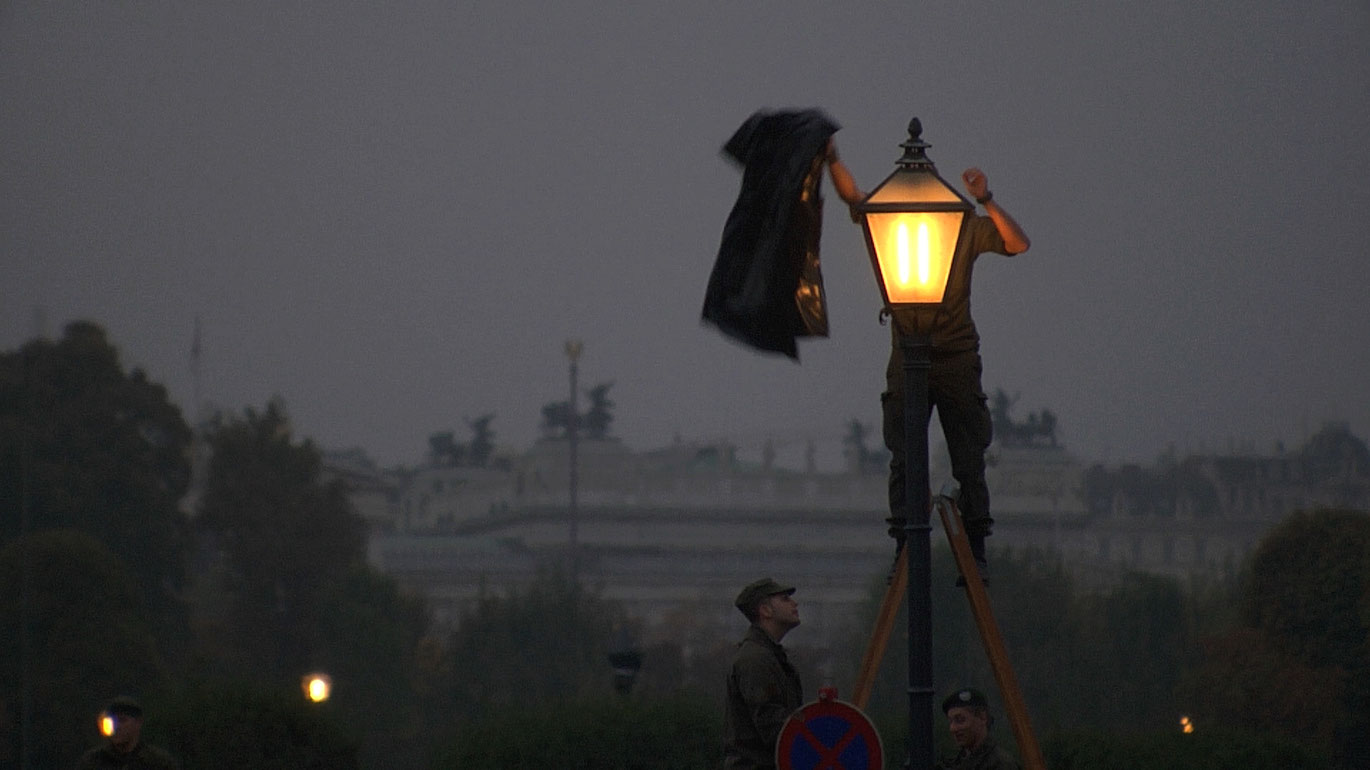 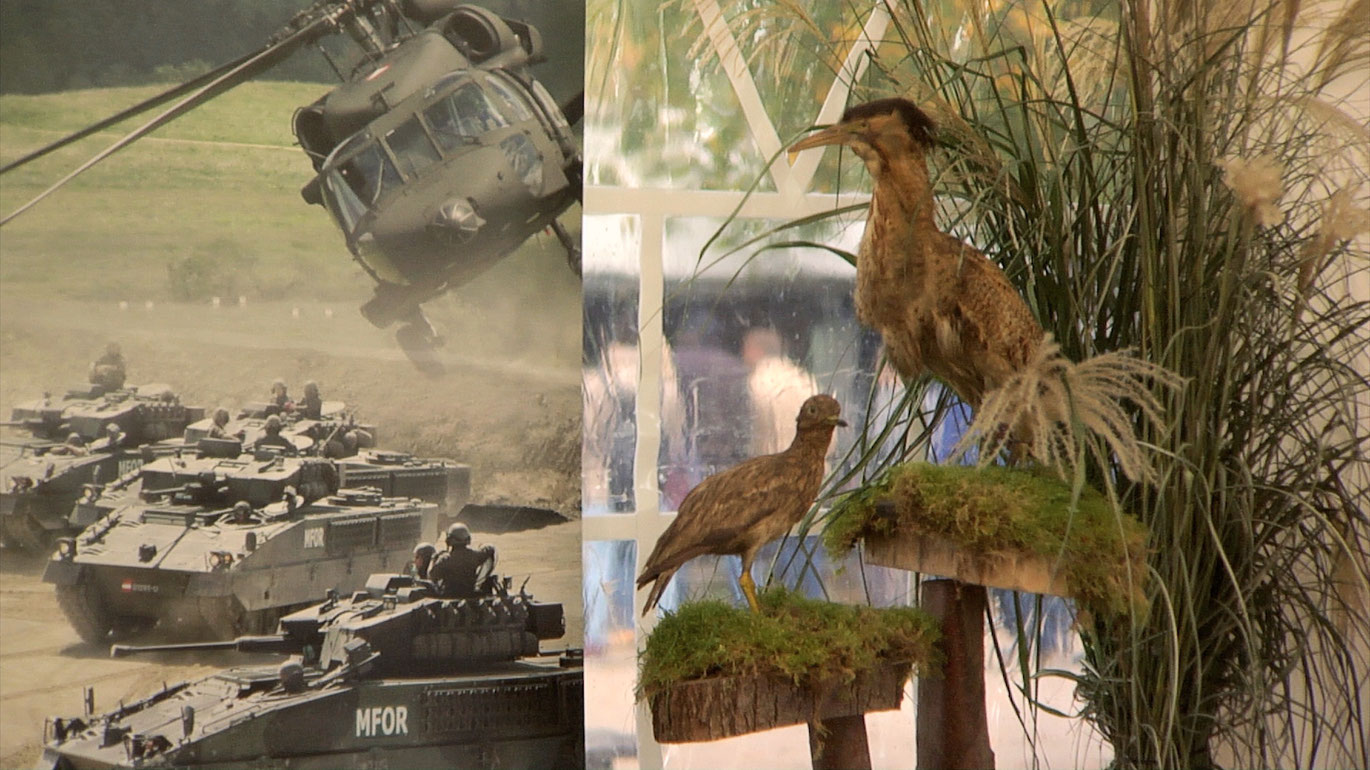 A few days before October 26, men clothed in green camouflage prepare Vienna's Heldenplatz [Heroes' Square] for the country's National Holiday, setting the stage for the parading of Austria's Armed Forces. Georg Oberlechner documents the event in four chapters headed by titles hearkening to military maneuvers. It all begins with "Approaching the Enemy" and the construction of what turns out to be a Potemkin-like village involving tents, motor vehicles and all kinds of military equipment. The nightly arrival of tanks traveling along Vienna's Ringstrasse Boulevard under police escort crystalizes into the climax of the chapter. On the day that the military spectacle is to take place, a suckling pig does its rounds, already roasting on a spit in the wee hours of the morning. Later in the day an honorary regiment seen standing at military attention divides in two for the Federal President to make his way into the chapel of the Imperial Palace where the Federal Chancellor lays a wreath in honor of those who fell in the World Wars and a priest asks God to bless all the dead as well as living soldiers. While a prayerful atmosphere continues to linger in the chapel, a festive mood under heightened media attention takes over the Heldenplatz.
Oberlechner calmly captures the camouflage-toned hustle and bustle of the event while attempts are made to explain the status of the Armed Forces, not only as defenders of the country but also the environment ­– a notion underpinning the paradoxical title of the film. During their solemn oath, not all the recruits enunciate "I swear". Half funny jokes accompany various deployment exercises as broadcast over loudspeakers by a master of ceremonies, only to take an unintentionally hilarious turn. The Corncrake Paradox is an entertaining representation depicting the current state of this annual festival of projected masculinities. Bonjour Tristesse, comrades! (Melanie Letschnig)

Every year on the 26th of October, Austria celebrates its national holiday with a large scale military exhibiton on Vienna´s Hero´s Square. The Corncrake Paradox follows the physical and semiotic production of a narrative which, in its popular form as mass event, significantly contributes to a hegemonic understanding of state sovereignty, power and masculinity. Thousands of images of the exhibition are produced and distributed every year by state and private media outlets, spectators and the military itself. The film seeks to observe the production of these images and to contribute an additional narrative. One which refuses an authoritarian interpretational sovereignty, searching for a form to deconstruct the normative scaffold of esprit de corps values, nationality and soldierly masculinity by means of camera, sound and montage. (production note)