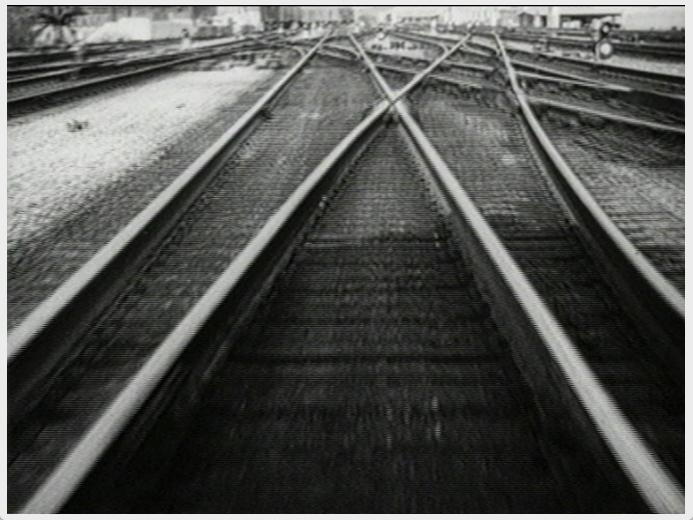 The Phoenix Tapes show re-edited excerpts from 40 films by Alfred Hitchcock. The six chapters focus on a personal selection of various leitmotifx in Hitchcock´s work.

"The consequence of this is not only to highlight Hitchcock´ sobsessions with certain types of repetitive movements and highly loadedvisual signifiers, but to suggest that these actions are part of auniversal language of gesture that encompasses both cinematic andeveryday modes of communication."

The Phoenix Tapes show re-edited excerpts from 40 films by Alfred Hitchcock. The six chapters focus on a personal selection of various leitmotifs in Hitchcock’s work.


Girardet and Müller are unique in their willingness to let Hitchcock speak for himself; it’s only through them that we are given the unadulterated Hitchcock, distilled to an almost unbearable concentration. The captivating unease that results would make the master himself proud.

Cut together from 40 of Alfred Hitchcock’s films, Christoph Girardet and Matthias Müller’s 6-part Phoenix Tapes is a surreal collage of the master director’s themes, motifs, gestures, and objects in a pure cinematic experience. More than a mere catalogue of Hitchcockian fetish objects and complexes, Girardet and Müller reconnect us to original experience of Hitchcock’s films by removing the familiar context of those sounds and images. In doing so, Phoenix Tapes examines the uncanny fear specific to the master of suspense and through those Oedipal traps, guilty consciences, maternal obsessions, and murderous desires, explores the dark recesses of cinema’s own collective unconscious.

We love found footage works here at MMC! and so we have particular fondness for Christoph Girardet and Matthias Müller’s 45-minute, 6-part patchwork, Phoenix Tapes. Made from 40 films by the master of suspense, Phoenix Tapes interrogates the Hitchcockian while liberating it from Hitchcock and his films themselves. No single director’s style, techniques, tropes, or iconography are as popularly circulated or as widely familiar as those of Alfred Hitchcock, and while the continued affect of his work is a testament to his skill, it is inevitable that the meaning and power of the Hitchcockian is made formulaic and predictable. Girardet and Müller unchain Hitchcock’s special brand of uncanny dread from its overly familiar narratives and calcified theories, allowing it to be experienced directly with what Gilles Deleuze calls “emancipated senses” and enjoyed as “pure optical situations.”

Phoenix Tapes commences its effort in distillation with its first part, “#1 – Rutland,” presenting eerily empty locales from various films, including domestic spaces from Rear Window (1954), To Catch a Thief (1955), and The Birds (1963), imposing structures such as the Rutland building and the steamship from Marnie (1964) and the Golden Gate Bridge and the Palace of the Legion of Honor in Vertigo (1958), urban street scenes from The Man Who Knew Too Much (1956), Shadow of a Doubt (1943), and I Confess (1953), and portions of the crossroads/cornfield sequence from North by Northwest (1959). These empty scenes, punctuated by moments of black screen and empty, echoing diegetic sound, inspires an unrelenting sense of isolation and unease comparable to what Dominique Païni describes as “disquiet” and André Bazin calls “disequilibrium” – that near imperceptible moment when suspense culminates; when comfort and support are lost entirely, when inertia takes hold completely, and when the fall invisibly commences. “#1 – Rutland” also relies heavily on the notions of heimlich, that feeling of being at home that is both familiar and private, and unheimlich, that ghostly, weird aspect within the everyday that is always sensed and occasionally revealed. Girardet and Müller liberate these Hitchcockian spaces from their usual context, releasing them from their places in narrative progression and imposing their psychic fatigue on the viewer. Humanity is present at the edges of these spaces, but little access is given and we are left wondering if we are following or being followed.

The second portion of Phoenix Tapes, “#2 – Burden of Proof,” takes the uneasy game of investigation hinted at in “#1 – Rutland” and brings it to the fore by entirely concerning itself with moments of hiding and revealing, of discovering and destroying. Various Hitchcockian objects are handled in close-up – wallets, keys, lighters, rings, envelopes, monograms, guns, knives, notes, and documents – and discoveries are made – a tea tray reveals notes under a blotter, sleeping pills are found at the bottom of a cup of tea, light escaping beneath the bottom of a doorway turns on and off. Sally Shafto suggests that “an object impels a Hitchcockian narrative” and it is only hands that furtively and ambiguously investigate, as if to conceal identities from the guilt alluded to in the segment’s title. In “#2 – Burden of Proof,” Girardet and Müller create arrangements that inspire new contexts and connections, inspiring new associations and revealing hidden meanings – the red ink on Marnie’s sleeve evokes blood but the blue paint on Louis Bernard’s hand, edited to follow, evokes blood as well. To use Shafto’s words, Phoenix Tapes utilizes the “false continuity” and “irrational cuts” that define “modern cinema” to reconnect us back to Hitchcockian suspense and reconsider cinema as not merely a kind of universal language, but one with a syntax that hints at its own primal needs and desires, what Thomas Elsaesser approaches when he wonders if Phoenix Tapes is a “thought experiment” that proves “that the cinema itself, and especially Hollywood genre cinema, has an unconscious.” By its two following segments, Phoenix Tapes takes its game of hide and seek into more troubling locales beyond the obviously material.

The disclosure of the hidden takes an explicitly psychological turn in “#3 – Derailed.” The segment opens and is rooted in a clip from Spellbound (1945) of John Ballantine looped to portray his head moving in a circular motion that displays a disturbed sleep and connects the troubled dreamer to the imagery of trains that make up the balance of the section. Müller and Girardet elaborate on the metaphorical authority of trains to Hitchcock’s murderous psychopaths and wrong man plots – powerful, unrelenting, impelling, locked into a single direction. “#3 – Derailed” also draws these disturbances back to childhood, matching Hitchcock’s use of miniatures with shots of carousel horses and terrorized children. The following section, “#4 – Why Don’t You Love Me?,” takes the uncanny’s origins in childhood anxieties and rolls them forward into the complexes of weak men struggling with problematic maternal relationships. The fourth segment of Phoenix Tapes is arguably its most dense and satisfying. The opening and repeating clips of Alex Sebastian from Notorious (1946) attempting to wake his mother by repeatedly saying “Mother?” casts him as a scared child and has a disquieting energy about it, particularly as his mother, facing away from him, repeatedly fails to respond to inquiries and when the reverse shot of Madame Sebastian is replaced with the empty maternal bed of Mother Bates, her imprint on the bed coinciding with the location of Madame Sebastian. Two songs, the recurring rhyme of “Mother, Mother / I am ill” from Marnie and Hank McKenna singing in The Man Who Knew Too Much “When I was just a little boy, / I asked my mother / what would I be?,” play over images of twitching, peering, and silent men and link their madness to some failure in their childhood relationship with their mother that remains alive and now monstrous in adulthood. Seeing the effect and perceiving the cause without any detail makes “#4 – Why Don’t You Love Me?” a particularly chilling portion of Phoenix Tapes that encourages us to find the uncanny problem with Hitchcock’s maternal figures imprinted in other moments in the director’s films even where not narratively connected.

Phoenix Tapes contains an abiding fascination with the apparently lifeless, with the uncontrollable, and with involuntary actions and repetitions. This sense of helplessness and compulsion is first shown in “#1 – Rutland” by the appearance of numerous direction signs and arrows painted on buildings and continues in “#2 – Burden of Proof” with hands that stop mid-reach and compulsively wash themselves. Automata and inevitability abound in “#3 – Derailed” and become internalized in the complexes of adult men in “#4 – Why Don’t You Love Me?” In “#5 – Bedroom,” male-female relationships become victimized by compulsive behaviours. Women appear trapped in this section, wringing their hands and casting their gaze downwards, apparently awaiting their fates rather than planning their escapes. Men, on the other hand, engage in physical domination, clasping hands strongly and subduing female resistance with forceful embraces, undressing, and strangling. Pain and pleasure merge here and the body blurs the line between orgasm and death rattle in the decontextualized visions arranged by Müller and Girardet. This disconcerting mixture of sex and violence, of animate and inanimate action, of life and death, culminates in Phoenix Tapes‘ final segment, “#6 – Necrologue.” There, a single close-up of Lady Henrietta Flusky from Under Capricorn (1949) waking from a deep sleep is slowed to a speed that Steve Walker suggest “leaves viewers wondering whether she is fighting death.” This image of a woman hovering between life and death is eerily compelling for being both beautifully serene and repellently fatal at the same time and for lacking any context other than the preceding 5 sections.

Phoenix Tapes is a brilliant effort that is consistently rewarding with each viewing, loaded with content and ready with new discoveries. It reconnects us to Hitchcock’s belief in “pure cinema” – the capacity of film to convey meaning in purely visual terms – and Robin Wood’s suggestion that viewers merely need to “look without preconceptions at the sequence of images that Hitchcock gives us” and “react spontaneously, and consider their reaction,” thereby being “led, very swiftly by the straightest path, to the film’s profound implications.” Phoenix Tapes attempts to shake off those staid preconceptions associated with Hitchcock’s films, and even if they are not entirely successful in upending that hegemony, Girardet and Müller are at least able to diminish the relevancy of conventional understandings and reinvigorate the magical, fetishistic power of the Hitchcockian to be felt and sensed rather than rationalized or understood. As a found footage work, Phoenix Tapes is naturally a difficult film to release (as are all of Müller and Girardet’s collage works, testified by our inability to source even a clip that shares a sample of Phoenix Tapes‘ content). It was originally commissioned as part of “Notorious: Alfred Hitchcock and Contemporary Art,” an exhibition by Oxford’s Museum of Modern Art celebrating Hitchcock’s centenary. We are hopeful here that if anyone could make a commercially available, hard media edition happen, it would be the Criterion Collection, as Phoenix Tapes is an excellent access point to experimental cinema and an insightful commentary of one of film’s true geniuses.

We originally considered a kind of mosaic design for a cover treatment, but ran across Cristiana Couciero’s portrait of Hitch as a paneled collage and felt it was definitely on the right track. A variation in the colour-scheme and an expansion of the panel-concept to the background behind Hitchcock would make for a more encompassing, claustrophobic image better in keeping with the spirit of Phoenix Tapes, but Couciero’s treatment is fundamentally complimentary to the film and is beautifully executed as it is, suggesting that elaboration on the work would be ideal to a Criterion edition of Girardet and Müller’s fascinating film.