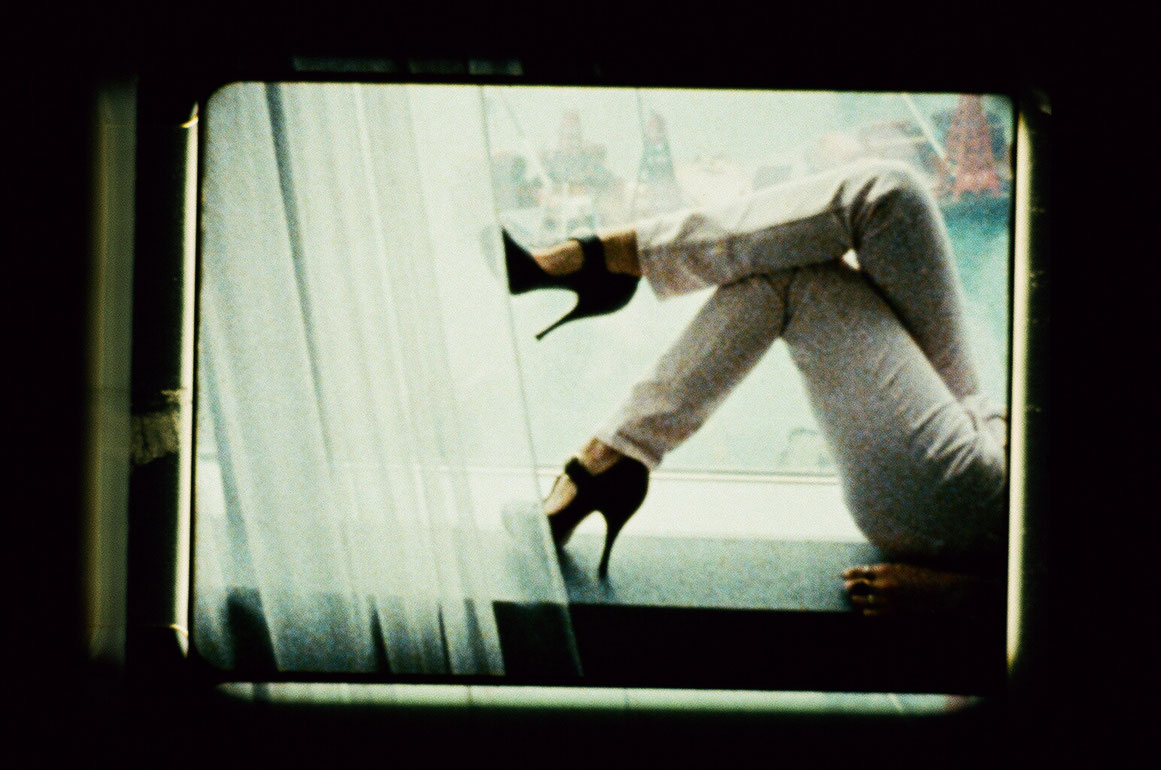 Silhouette black & gold lamps looking like a butterfly diadem and the curtain wall glides forth, dark in darkness, an exotic stage or set of a Sternberg film, and the room lightens, and SHE, whom we first only see from the back (like in an old painting) sits looking away, motionless, to then at the magic moment—magic! the image jerks wretchedly as though Leacock drunk or Warhol asleep—turn around and face the camera, as long and directly and secretively as the people in films by Friedl vom Gröller tend to do, and shortly thereafter break the flow; but just to simply laugh, like in a home movie, and with eyes open or shut sink back into herself in a dream state, absently, melancholically or posed or both or neither (SHE: “Asian beauty” soi-disant, Suzie Wong, Party Girl, brass skinned, Kmer-eyed, Parvati sculpture in pumps), while the film swings between high-reel advertising and rolling pans across the silky blue depths of Hong Kong harbor´s waters (dotted red-yellow by cranes, barges, containers) and stumbles across cuts to gloriously turn the face of the woman who is now lying on her back on the window bank at a right angle (as though the witch in Vredens Dag, whom one ties to the ladder and heaves upward), and distant automobiles stream along her cheekbones as in a dream and then her hand fills the shot with huge, colorful rings, like in Puce Moment and this hand turns and opens and spreads itself as a skin-landscape across the screen, turning the image into chaste pornography, shudders of focus and blur and the camera—as though it were all too dense and intimate and the calligraphy of the hand lines no longer legible—sweeps from right up close to far away, from hand to harbor and the far flung ocean, and here the film ends abruptly, imperfectly, too brief or too long, too mangy or refined, too inept or professional, and the more often one sees it (this film that makes you shrug your shoulders, annoyed, at first), the less awkwardly clunky it becomes, until evoked in the end is the semblance of jewelry, simmering silently, gently cruel, like the visage of the person portrayed.