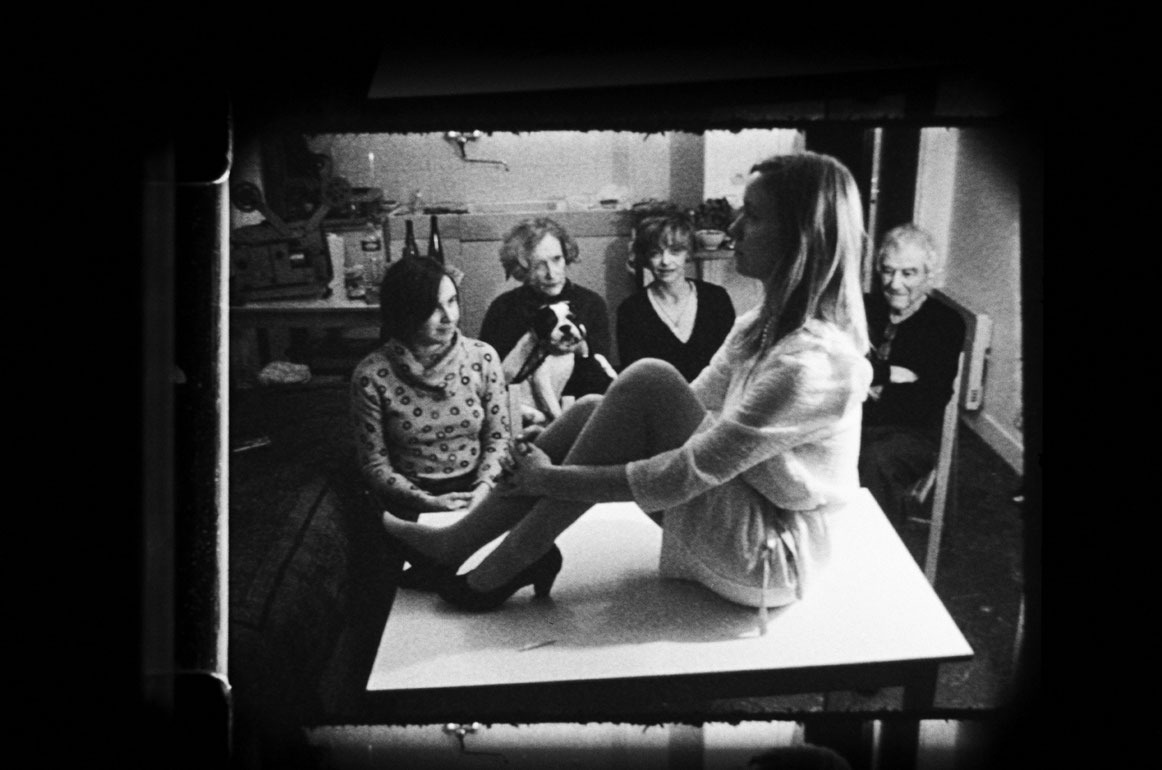 In her film La Cigarette, Friedl vom Gröller places five people before the camera. The location of the gathering remains vague – a small, lived-in room with a table, chairs, a sink, and in the background on a smaller table, open bottles and a film projector. This circumstance, as well as the fact that two “Nouvelle Vague” protagonists are among the five gathered here, Jackie Raynal and Jaques Rozier, make it appear that film and filmmaking are a specific motif of this gathering, or at least set the tone that runs through the meeting.

Four members of the group, three women and a man, observe a young woman observed on camera, who sits on a table positioned in front of them, posing as if she were a studio model. Yet, as the film goes on it becomes clear that this comparison can’t be right. It isn’t the study of the human body that this group is gathered for: the young woman at the table is more a medium than a model. She embodies the medium for the memories of all those gathered at the table; even more so, the medium for the viewer’s projections of the stories and biographies that are imagined about her. The viewer alone sets off the grand narrative of this film; whose ideas and associations are mirrored in the gazes of the group. The filmmaker’s direction puts the viewer in the role of the narrator and the dramatic advisor of a private theater. She makes herself an explicit part of the ensemble by suspending her position behind the camera for a moment and handing the young woman a cigarette, from which the work gets its title, and lighting it with a match. The smoke, which wafts from the cigarette and which the group can smell, inevitably evokes the idea of subversion and the forbidden. At the same time, it gives a sense of a physical manifestation during a séance, a symbol and materialization of contact with the repressed and with what is believed to be dead. Like the smell and taste of Proust’s short story, Madeleine, the smoke of La Cigarette permeates the film and forms an infinite construction of our memory.