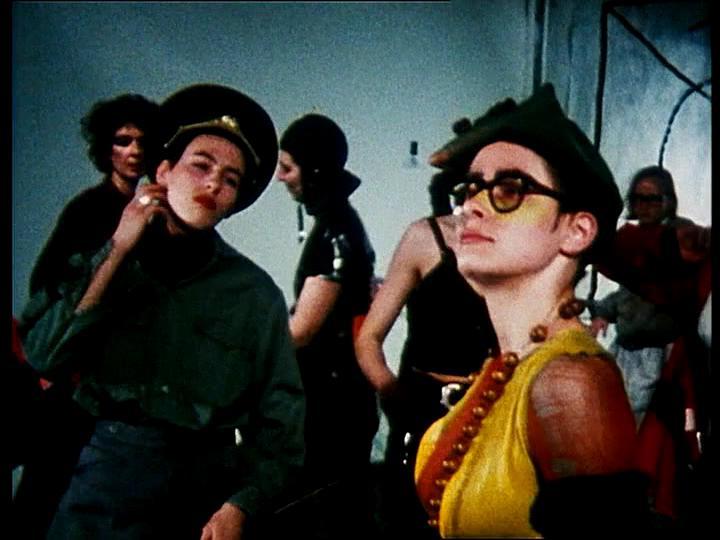 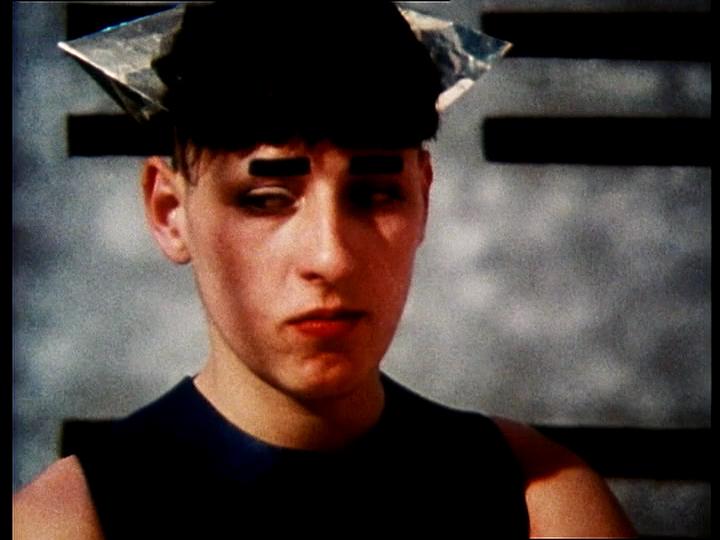 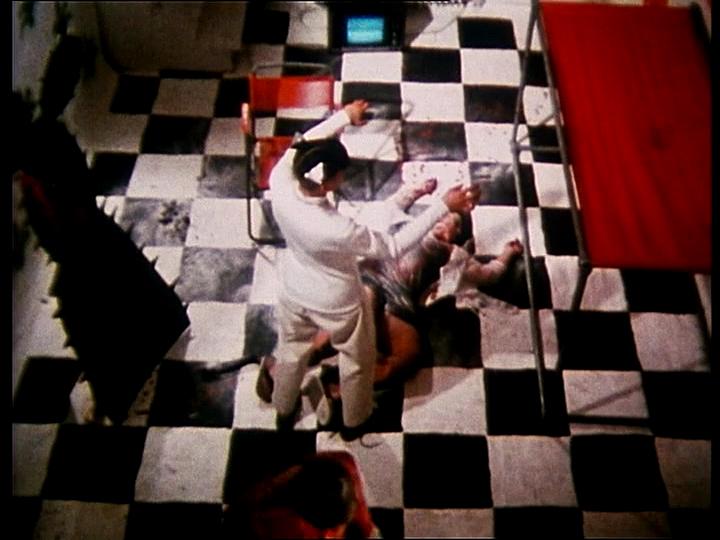 FLAMING EARS is a pop sci-fi lesbian, fantasy feature set in the year 2700 in the fictive, burnt- out city of Asche. It follows the tangled lives of three woman: Spy, a comic book artist; Volly, a performance artist and sexed-up pyromaniac; and Nun, an amoral alien with a predilection for reptiles. It´s a story of love and revenge, and an anti-romantic plea for love in its many forms. It´s also a story laced with sex, violence and a pulsating soundtrack, a cyberdyke movie, stimulating both the body and the brain. (Elke Schüttelkopf)

Story is set in the year 2700 in the burnt-out city of Asche. Most of the visible populace appear to be women; a few men turn up to perform minor duties. The film first focuses on Spy (Susanna Heilmayr), a comic strip artist who sets out into the streets after she learns her printing office has been burned. This is the first feature for the trio of filmmakers who heretofore have done super-8 shorts.

In her odyssey, she will encounter the film´s allegorical denizens: pyromaniac Volley (Ursula Pürrer) and Nun (Angela Hans Scheirl), a terminator-like creature dressed in red plastic. The characters are engaged in anarchic pursuits of power, pleasure and love, and spout delicious lines like "I want you to cut down on your perverted obsessions."

While the film draws on imagery from pop sci-fi and art films such as Metropolis, Last Year at Marienbad and even Rollerblade, its narrative follows many avant-garde cinema non-linear rituals, such as scenes of death and rebirth (the latter courtesy of a resuscitating vampire). Working with threadbare resources, the directors (who also star in the film) make adroit use of hand-held shots, stopaction animation and stylized miniatures to yield a suitable and alluring ambience.

Sexier than Sprockets, it hurtles into a future where the authoritative voices of the universe belong to lesbian go-go dancers, pyromaniacs, and bouncers. Shot in super-8 and blown up to 16mm, this visually provocative science fiction thriller harbours ornate dialoge too outrageous to be pretentious. "A melancolic bird is gliding over the sea of cruelty," a mysterious visitor alerts Spy (Susanna Heilmayr), a comic illustrator. "Can you feel the dew in your armpits?"

lt´s the year 2700. Spy is probably the last romantic alive in a color-saturated landscape littered with claymotion figures, cardboard dioramas, and erupting miniature volcanos. She encounters the socially irredeemable Volley (co-director Ursula Pürrer), a pyromanic sex addict with sharpened Mickey Mouse ears. After Volley burns down Spy´s printing house, Spy hunts down Volley to the lesbian nightclub where she performs. After the bar´s bouncers beat Spy to a pulp, she is rescued by Volley´s honey, Nun (co-director Angela Hans Scheirl). Ensconced in shiny red plastic, Nun is a crew-cut charmer with an appetite for crunchy snails and alligators. Volley, meanwhile, continues her rampage of firebombings, making an obscene phone call ("You sexy butter magott," she rasps into the receiver) before toching the telephone booth. The complex in this high-style Austrian independent, though, is less a foundation than a casual connector of different lives. Flaming Ear´s fierce women identify themselves through their basic instincts, rather than through their reactions to a mythic mainstream Michael Douglas. Their relationships are jagged and lyrically evasive.  When Volley catches Nun in the embrace of a policewoman, she turns her, Iiterally, into a cardboard cutout. Yet, as directors, Scheirl, Pürrer, and Dietmar Schipek (who also appears on the other side of the camera) manage to jettison the shallow detritus of tidy role models and dyke pick killers, with bad aim.