Fair Wind - Notes of a Traveller 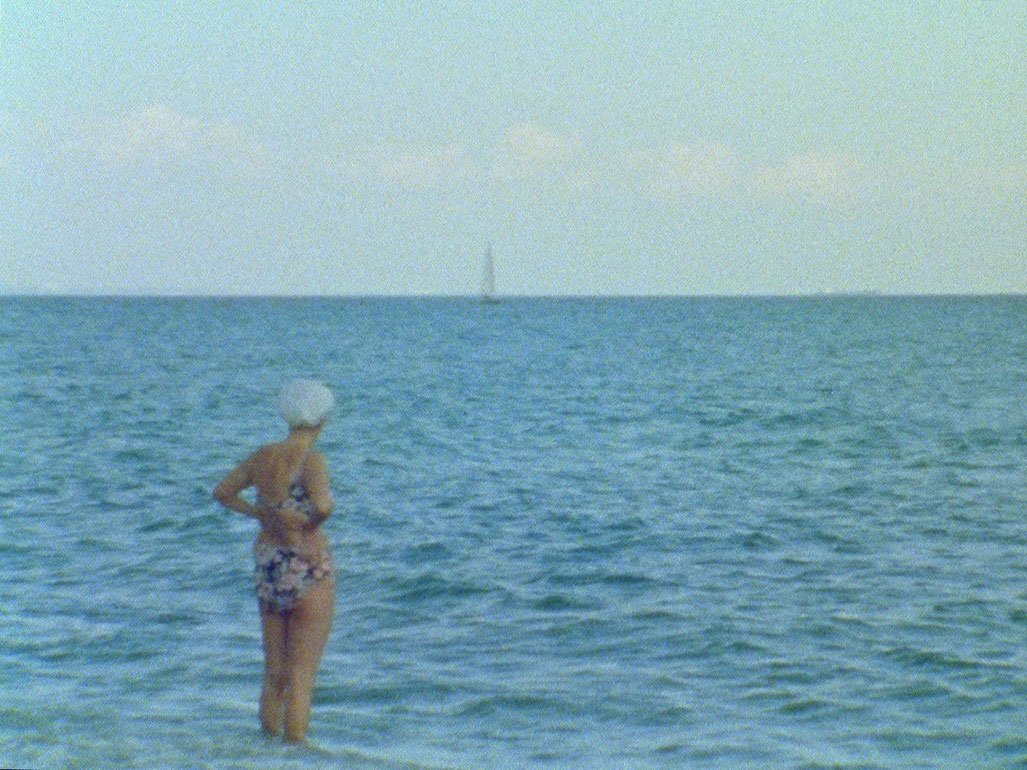 The two feet playing in bathwater at the beginning are the leitmotif for this journey across the land. They want fair wind and the sea! So the traveler sets off, with the Danube taking her and her barge to Bulgaria first, then she continues on with various forms of transport through Romania, Ukraine and Georgia, Azerbaijan and finally Kazakhstan. At the end of her journey she returns to Vienna, her foot in a cast but unbroken, as if her feet had to be calmed before the journey can truly come to an end.
This is a road movie in which the eyes (the camera) cannot get their fill of being on the road, of the many different images whirring by, of the almost reverential impressions left by breathtaking landscapes, the hustle and bustle of street life, and most importantly, the different kinds of movement, emotions and expressions in the faces of the people.
The soundtrack goes on a journey its own, with a subtle montage of ambient sound, voices and a cappella singing — none of which matches lip movements. A silent film you can listen to, a movie with sounds and images that seem to operate independently of one another. The film has an effect thanks to what it, atypically for the genre, fails to provide, lively, light as a feather and permeated by air and atmosphere. It works without interviews, historical or current information, statistics or critical social commentary.
The journey takes us over mountains and seas, through big cities and deserts, to a cloister and a Roma village, past dancers in Odessa and men snoring in a boat’s cabin, to see the hard everyday work performed in a Caucasian mountain village, into the world of the rich and to the homes of the poor, finally coming to a forced rest in a Kazakhstan apartment. A colorful mosaic of lust for life, curiosity and trust in the knowledge that everything that happens is welcome.
(Birgit Flos)
Translation: Steve Wilder


I decided to travel without destination. To go east without knowing where I would be the next day. Fair Wind is about falling in love with the world at first sight.
It is obvious that every moment only exists for that one moment, but this is what I realized on my way to Kazakhstan each time I recorded images and sounds. You can be the most perceptive observer and still miss most of these moments. There is nothing spectacular implied, but each of these moments is unique. It is like running around with a butterfly net. 24 frames of random light per second are burned into the film stock’s memory
When working with super 8, one can hear the passage of time. The camera rattles away right next to your ear. And since every meter costs a fortune, you have to trust in your intuition when pressing the button. I enjoy this part of filmmaking, because it is like playing.
Images, sounds, associations, atmospheres, sensuality and rhythm - they dance together to tell stories. My choice of a narrative using a minimum of text and voice-over is an invitation to the audience to make their own experiences and embark on their own journeys.
(Bernadette Weigel)

Travelling the post-Communist world: With each shot, we seem to see as much light as can be packed into a Super-8 frame. Rather than a painful brightness, the effect is that of contented saturation, visual plenitude. There is no program, simply the succession of frames, highlighting the texture and the squareness of the image, making possible a kind of explosion of reality in movement, color, industrial forms and forms of ritual. The brilliance of the soundtrack is a vital resource in the game Weigel´s film plays: a game between openness and closure, between the "open" of a voyage without a destination and the "closed" of a frame that is never going to run out of ways to fill itself.
(Chris Fujiwara / is the Artistic Director of Edinburgh International Film Festival and the author of books on Jerry Lewis, Otto Preminger, and Jacques Tourneur.)
Source: http://www.filmkrant.nl/slowcriticism_2013/8606)

Chris Fujiwara checks in from Edinburgh to report on Fair Wind – Notes of a Traveler, and finds an Austrian film travelling the post-communist world, blissfully without alienation and with a constant ability to find mystery.

In the absence of any knowledge about the journey documented by the film, apart from the place names that appear superimposed in white type as each new location is reached, we must be satisfied with other certainties while watching Bernadette Weigel´s Fair Wind – Notes of a Traveler (Fahrtwind – Aufzeichnungen einer Reisenden). Above all, with the confidence of feeling that Weigel communicates: a confidence that comes from love, and Fair Wind is nothing if not a film in love with light. With each shot, we seem to see as much light as can be packed into a Super-8 frame. Rather than a painful brightness, the effect is that of contented saturation, visual plenitude.

If the image is constantly in a condition of being just right, the titles give both too much and too little: too much information, since the names of towns are likely to be unfamiliar and anyway of no use, and too little, since the important things – the links between these places, the motives that drive the filmmaker from one to the next – are always elided. Denied the code that would govern Weigel´s choices, the viewer more readily grasps the arbitrariness of any code and any choice. Which is to say that instead of committing herself to the rules of a discursive genre Weigel locates her film in the negative spaces lying around the genres she brushes past: travel journal or self-portrait, post card or essay.

The space of the film is not just "post-Communist Eastern Europe and Central Asia", but also the space of a hundred or a thousand separate encounters between the filmmaker (once she has set off from her home in Vienna) and the people of the post-Communist world. There is no program, simply the succession of frames, highlighting the texture and the squareness of the image, making possible a kind of explosion of reality in movement, color, industrial forms (the Odessa funicular with its solid-color cars) and forms of ritual (elderly Ukrainians dancing to a town-square band´s performance of "In the Mood"). Every view, however enchanted, still implies what is, and remains, a social and historical context, but that context becomes displaced – not so much "made strange" as offered up to the delirious purposelessness of cinema, of this cinema.

Fair Wind is a film without alienation, so blissfully so that it is not even made against alienation. Fair Wind may perhaps be criticized for fetishizing the obsolete, for seizing hungrily on what it loves too sentimentally. But the success of the film has to do with neither alienation nor its opposite but with the filmmaker´s constant ability to find mystery, as if receiving it as a gift: a young couple in a partly darkened apartment, a card game on the grass in the country, shadows of leaves fading in and out dramatically on a white plaster wall, the broad smile of an elderly woman refugee, the pleasure of two nuns as they pull on bell ropes until they are lifted up in the air. Everything has just the expressiveness that it has: no excess or imbalance is caused by an expressive intention in the world in front of the camera, or on the other side by any need on the part of the camera to justify its being where it is.

The sounds that overlay the images draw very selectively from the field of sounds that must have been available, so that the movement of people with its urgency or randomness is never allowed to determine the pace and balance of the image. A gentle and graceful musique concrète of boat and train engines lulls the eye across sequences of short discrete shots; a lone cat´s meowing evokes a vacancy of night in an urban residential neighborhood. The brilliance of the soundtrack is a vital resource in the game Weigel´s film plays: a game between openness and closure, between the "open" of a voyage without a destination and the "closed" of a frame that is never going to run out of ways to fill itself.