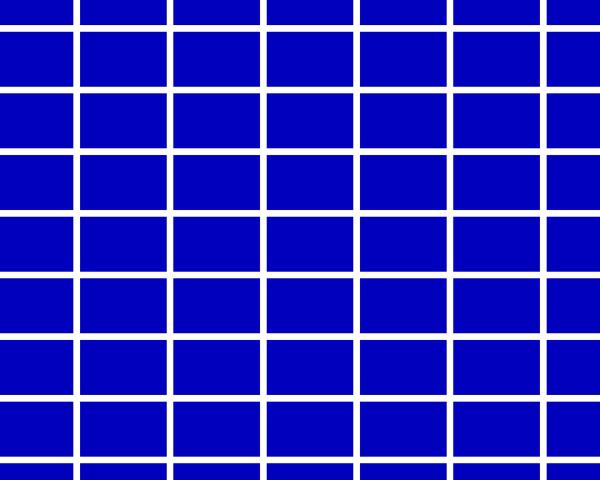 "The Grid" by Gerald Weber (english)


Wassily Kandinskys statement that the point would be the first clash of the tool with the surface, bringing it thus to fruition, is probably also valid for the initial sequence of computer graphics: one cathode ray meets the phosphor coating of a picture tube and generates a shining spot. When, in the middle of the twentieth century, points began to flash on the screen of a picture tube for the first time, named Williams Tube, however, it was not about the creation of images, but about the use of picture tubes as swift and cheap main storage; these were separated into a grid of which the singular coordinates were provided or not provided with points by the electron beam, with the intention to save singular information. A running program would have appeared as a square field of numerous points that form mysterious patterns while flashing and extinguishing, thus delivering a kind of an abstract, digital moving image.

Since then, digital image production has advanced (pushed by the idea of a preferably real, natural picturing of a concrete reality). The basic component of the monitor as an (invisible) grid wherein light spots arrange and fade again at a hardly realizable speed and varying in intensity alongside horizontal lines, has certainly survived.

The test arrangement of Norbert Pfaffenbichlers and Lotte Schreibers video A1B2C3 that lasts not more than five minutes, appears at first sight imaginably simple: a square, white grid is superimposed on a monochrome blue screen. The proportions of the resulting squares correspond to the aspect ratio of the monitor screen, following the standard digital video measurements of 720 x 576 pixels.

This grid is put in motion, according to a previously fixed arithmetical system, alternately alongside the vertical and horizontal coordinates, whereas the directions of motion repeat. Their speed, however, continuously varies.
The period of the respective motion sequences as well as their rate is calculated from factors or multiples of the above described basic geometrical measurements.

Bernhard Langs accompanying soundtrack derives from a similar mathematical principle. He initially fixes a frequency grid, of which the proportions correspond to the surface of the image space. The composer diagonally measures this frequency space by means of a Glissandi-like modulation of the tone pitch on a primary level and of the signal density on a secondary level.
Two frequency responses acoustically interact: an electronic humming that equates the deeper frequency range is subject to different accelerations, while a sine-like sound permanently swells and subsides again. The algorithms which are the basis for the modulation of the frequencies are again calculated from the factors or multiples of the primary basic measurements of the grid.

When recurring to the grid as a means to define image and sound, A1B2C3 opens up referential points on two different levels: one was already addressed, namely the one regarding the technical and thus media-immanent basic condition with respect to the structure of the video image as grid. In a second movement, the grid, however, also refers to the tradition of modernism, which made it take centre stage in the field of artistic practise, thus radically proclaiming the autonomy of art vis-à-vis nature, mimesis and the real world (Cubism, De Stijl, Mondrian, Malevich, Op-Art, Richter,...).

Already in an early video work of Pfaffenbichler and Schreiber  36 (2001) , explicit references were made towards abstract modernist painting, particularly to Gerhard Richters colour charts of the 1960s. 36 is also bound to a structural approach towards the medium, as in A1B2C3, appearances, motion and duration of the elements are subject to mathematical derivatives. Whereas 36 still reveals visual contents in the form of graphical components, in A1B2C3, the reduction is taken one step further.
The last visual element in A1B2C3 thus consists of the white grid which subdivides the blue of the monitor into identical squares.
The blue screen that functions as background, however, still contains the idea of a visual content. In the realm of film technology and television engineering, for example, a blue screen serves as background in front of which objects and persons are subsequently placed. In the realm of computers, the blue screen is the popular name for the screen displayed by Microsofts Windows operating system. When it cannot recover from a serious system error, the graphical user interface is cancelled and replaced by a monochrome blue. Bearing in mind these two examples, the blue screen can thus be considered both a before the image and an after the image.

With the animation, the grid follows its logic of a centrifugal existence, thus, ultimately, of a grid that expands whichever direction it might be, ad infinitum. The shown part on the screen (within the frame) stays only a fragment of the entirety at a particular moment. Insofar, the grid operates outwards and forces us to acknowledge a world beyond the frames. At the same time, its existence remains centripetal in the sense of the reflexiveness concerning the grid-likeness of the technical medium, thus directing back the space within the frames (the monitor and its functionality as system of horizontal lines and vertical pixels) on itself.

Speeding up the animation of the parallel lines which compose the square grid finally causes effects that, on the one hand, are connected to the sounding of the technical boundaries of representability, but also to the physiological relativity of our visual perception; the duplications of the lines that evolve on the screen are after-images and sometimes the lines dissolve due to a flickering of overlapping light signals.
The raster arrangement of motion, direction and rate of the repeated scans implicates the idea of an automated self-regulative machine, which follows its own immanent algorithms (a1 -> b2 -> c3 -> ...) and carries out arithmetic operations that we do not understand (since we are not aware of the function of a, b ,c ...).
In A1B2C3 it thus seems as if a digital computer scans a (meanwhile) empty data base for the last possibly still intact, identifiable and illustratable, concrete image contents.