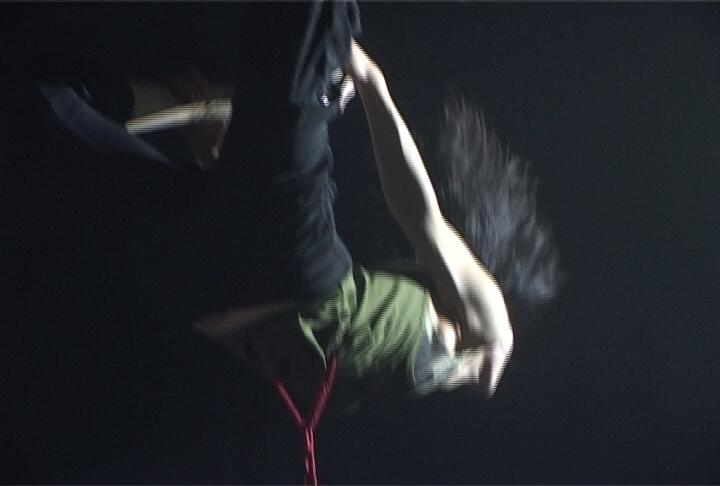 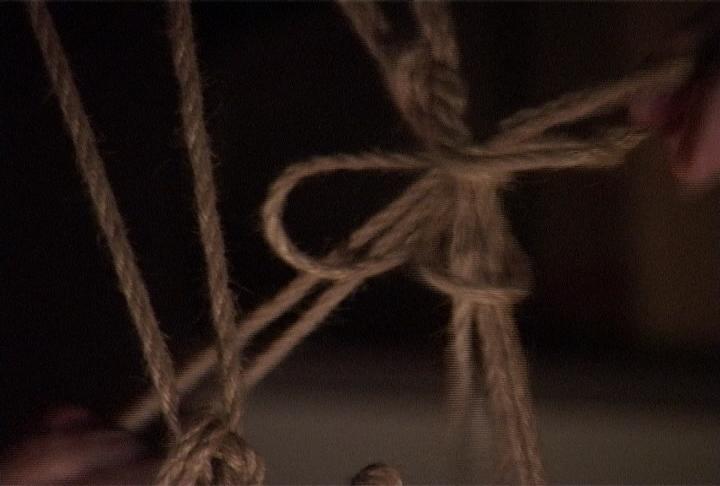 Hito Steyerl's 2007 film Lovely Andrea follows the artist as she returns to Japan, where she briefly worked in the 80s as a bondage model under the assumed name Andrea, to search for a photograph of herself. Steyerl interleaves the narrative with film clips that include superheroes Spider-Man and Woman with cultural and political references to bondage, including samurai practices, popular music videos and images of Guantanamo inmates. Lovely Andrea is played out like a psychological thriller in which Steyerl is both detective and missing subject.

-Hito, our trip to Tokyo is almost over.
But I still ask myself: what is your film about?

-But I have no idea with whom or whatever. Thats the story.

TEXT ON SCREEN: I AM LOOKING FOR A JAPANESE BONDAGE PICTURE OF MYSELF MADE IN TOKYO 1987

-Even back then they had a huge amount of magazines!

-But there are 100 publications every month.

-Allright. I have all kinds of stuff.

-There are hundreds of these

-The style of lighting was similar

-Wait! For a moment I really thought it was me.

-Youd really have to be lucky to find it.

-There is three and a half thousand just in these bondage series.

-And why is it so popular?

-And if you asked Anna and Nicole, the two girls I perform with,

-, one will say I just love to see the rope marks

-and the other: only when being roped I feel free.

-They like to mention the old samurai techniques, who also played with rope.

- when they rope a delinquent for execution

-The Japanese used them on American POWs during WWII

-Another martial arts school in the US releases instructive videos,

-which clearly state that one must not apply these techniques on people.

-In the US, they have these - Except in Guantanamo

-You are? I will translate today. My name is Asagi Ageha.

-Arent you a model, Ageha?
Yes, but today, Ill be translating.

-She was a bondage model,

-She came to look for that picture

-Did you do this job at this period?
Oh really?

-Do you remember the publisher? The cameraman?

-Back then there were lots of restrictions.

-Move your butt a little, please.

-It was most dangerous for us, when the police became relaxed.

-It was best when they were extremely bothersome.

-If the police is very active, they cheer things up.

-The more restrictions the better. I agree.

Titel ON SCREEN: Pictures restricted around 1987


-When they relaxed, the production collapsed.

-Somebody said: readers are attracted if we work around the restrictions.

-We should behave as if we were just as restricted as then.

-This is a German documentary filmmaker called Hitomi

-she once worked as bondage model in Tokyo

-the goal is to look for that picture.

-Really? Who was the cameraman?
She doesnt know.

-Which agent?  She doesnŽt know.

-You dont know the address either?

-Interesting that shes looking for her bondage picture.

-if youd count them, there must be tens of thousands, or even billions

-If you want a bondage picture of yourself I will tie you up.

-Its maybe a good idea! (type error on the screen)


-Hello, hello! Can I have a cigarette?

-Are you rolling already?

-She came to shoot a documentary film

-She once only did a bondage shooting.

-How should she look for this picture?
Well

-Do you think it makes no sense to look for it?

-No no no. Its very impossible, err, important

-Japanese SM is submissiveIts based on the feeling of shame.

-Its based on the feeling of shame.
Shame.

-On my first photo location as editor

-I was put naked and tied up.
Naked? Naked.

-And they dripped candle wax on me.

-And Mr. Nureki dripped it on me from here.
And then from there.

-You should understand the models (or models) pain. (type error models)

-An editor has to know!

-And was there a whip? Of course!

-What is shame? Libido of the brain!

-Genitals are not between the legs

-but between the ears.

-Its a world of the imagination.

-This also often happens with news pictures, within one picture

-history is being compressed.

-To offend somebody with the feeling of shame!

-May I come in?
-She is from Germany, and 20 years ago, she worked in Japan as a bondage model

-We are looking for that picture

-May we film the interior of the library?

-Yes, but please refrain from showing people, I mean us.

-She doesnt remember the location?

-No. Just that it was Japanese style.

-This is also slightly Japanese.

-Was it a documentary shooting or staged?

-Was it like this one or was it a (documentary) shooting

-I will continue shooting from behind

-Text: THE SEARCH IS RESTAGED FOR TELEVISION ----

-Otherwise I cant see your face.

-Was the camera team quite large? (type error on screen)

-Endo, are 4 people rather few or many?
-Thats basically the size of a team.

-Then its probably somewhere around here.

-Is this the last leg of the search for your photo?

-Its a bit extreme. Did you do that?

-I didnt catch that

-We checked it already  I asked you to check it again to be sure We are lucky!

-Not so bad. Want to see what I shot?

-Originally she came here to shoot a documentary film

-The plot is dramatic, right now the filmic tension is extremely high

-I dont know where to start to explain-
And it all happened now?

-Yes, the tension is a bit extreme.

Text: S/M SNIPER, TOKYO
EDITORIAL OFFICE
-Err, to get straight to the point,

-we are facing an investigation

-Let me explain; a woman is here

-she was looking around for this picture taken 20 years ago

-and she found it today at the sex archive before coming here.

-We saw the picture and believe that it might be your work, master.

-This is the period.

-Thats by Tanaka Kinichi! There is no doubt about it.

-She is here now and would like to meet you, if possible

-Actually she is also recording our phone conversation

-Are you rolling already?

-Did we meet before?
It seems so.

-Do you remember me?
Well, no.

-Dont you remember him at all?

-Do you have the picture?

-Should I sit here?

-No please over here
No, the background is bad over there

-I remember the picture very well

-But I wouldnt exactly recognize you now!

-Does he remember anything about the models?

-Many girls were half tricked into it

-Some were told it would be a different kind of job and then talked into it.

-I think many people felt cheated.

-They only realized on the set what they were supposed to do. Some also cried.

-It was such a dangerous and underground field

-I think it was also heavily mafia dominated.

-Not all of them were mafia dominated.

-So back then, the girls were scouted on the street and immediately photographed?

-That was common and they didnt get paid either!

-What are you doing, by the way?

-I am a show performer

-Well, I do self suspension
Self bondage? Yes.

-And basically I perform with Steve in bondage shows


TEXT ON SCREEN: BONDAGE IS WORK

-Does it sometimes hurt?

-Sometimes it hurts, depends on the point

Text: WORK IS BONDAGE
-You mean in a normal society everything is bondage?

-Yes. Not exactly with rope but everybody is sort of in bondage

-That one is bondage.

-You are connected to other people through the net

-You are tied to other people like in a web

-The web or the net

-Why were you looking for this picture?

-Oh, this is interesting:

-She was working under the name Andrea

-this was her friends name

-but this friend was murdered and it seems as if she was a terrorist.

-And that she was put on a flag in Turkey

-and in Japan she appeared in an SM magazine in bondage,

-this was interesting to her and thats why she wanted to find the picture.

-Ladies and gentlemen: the event youve all been waiting for!

-the unveiling of the art museums newest painting

-Please write a letter to Andrea

-and then well send you a photo

-in Roppongi disco clubs every night.

-Andrea is a businesswoman

-who tries to earn money in Japan

-which is economically prospering

-and by smelling Non-Japanese

-actually this sentence is a bit embarrassing.

-Do they also write this poetry next to your photos?

-But soon I noticed: to do shows is a bit

-so I started to do self-suspension, which is not

-by being tied up or dominated by somebody else

-Self suspension can be entertainment and high quality

Text: INDEPENDENCE
-Has it got to do with independence?

-When flying in the air, I really fell free.

-on the other hand Im bound with rope to the center of something.

-I feel these two feelings at the same time

-Maybe I cant live without this feeling anymore

-What are you studying, Ageha?

-Ive got a pretty good rope trick of my own!

-Its disappeared! As if by magic! (type error on screen)

-I liked your answer, but

-Oops. Shit. Light! But youll have to do it again.

-Nobody knows this woman.

-You have to repeat the question.

-So, do we start again?
Once more same question:

-I still dont know:
what is your film about?


Text: A FILM BY HITO STEYERL
WITH

-I should get some Botox, I think.

-But you consider yourself a feminist?